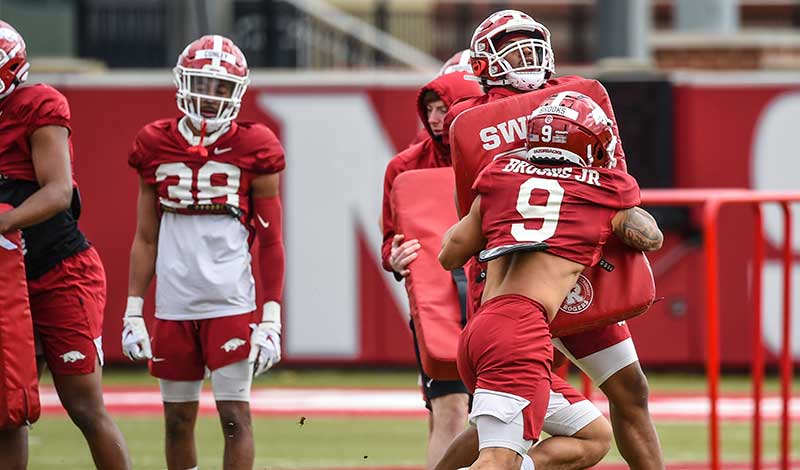 FAYETTEVILLE - Arkansas’ scrimmage at 10:30 a.m. Saturday will be open to the public and for two reasons.

Arkansas head coach Sam Pittman explained those reasons on the Paul Finebaum Show, leading into the Razorbacks’ first practice since the March 23 prior to spring break.

“Part of the reason we opened our scrimmages is I want our quarterbacks to feel a little bit more pressure,” Pittman said. “They’ll feel that a little bit more with fans in the stands. Some guys play better with people in the stands, and some guys play worse. We have to find that out this spring. The other reason is we want folks in our state to be able to see us play.”

“I feel like having the fans puts a little more on edge to go do what we’re coached to do,” Burks, a junior, said after Thursday’s practice. “I feel like it’s good for us knowing we’ve got fans that come out and support us, while we’re just practicing.”

Burks said the Hogs showed no hangover from the spring break layoff.

“Honestly, I felt like this was one of the best practices we’ve had since spring ball started,” Burks said. “I feel like it was a good practice for all of us.

“We came out and executed. The defense pushed us. The offense pushed the defense. We went out and competed with each other and got better.”

Though he always appeared to carry weight well on his 6-3 frame, these are literally the lightest practices for Burks.

“When Coach Guiton got here, we talked about my weight,” Burks said. “He said he wanted me down to like 225. I weighed in the other day at 223. So, I’m getting back down there. I feel like my body has changed tremendously, and I thank my teammates for pushing me every day to get to where I am.”

Gaining weight is the objective for junior defensive tackle Isaiah Nichols of Springdale, listed 6-3, 281 but determined to push 300.

“When you get to the NFL, everybody is 300 unless you’re an edge rusher,” Nichols said. “I'm putting some weight on and getting stronger in the weight room and just building solid muscle. I’ve talked to Coach (Jamil) Walker (the strength coach) and he’s like, ‘You can gain weight and be solid.’ Especially with the weights they have us doing in the strength and conditioning, the nutrition staff, the nutrition plans they draw up. Right now, I’m on track. I’m getting to a good weight.”

“He looks good,” Nichols said. “He’s young, though. There’s a lot of developing, especially at the defensive end and D-line position period. If you look at him on the field, you notice him on the field. You see how fast he plays and how explosive he is off the ball.”

The Razorbacks are off Friday. They conclude their 15 practices with the April 17 Red-White spring game.