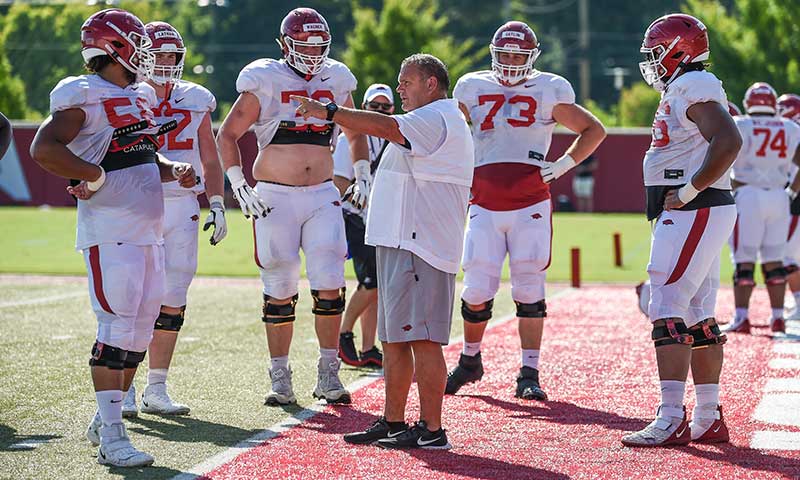 WHY THEY IMPRESS
“They’re hard to move and they can rush the passer,” Pittman said. “I’m not for sure you’re going to have to take them out of the game on third down. I don’t know that I would. Barry (Odom, the defensive coordinator) is going to make that decision, but those guys are hard to block.”

Apparently, Coates is as elusive as he is strong. “Well, he’s making all kinds of plays,” Pittman said. “I mean, we can't hardly block the guy.”

Cunningham, the 6-7 and 325-pounder bulking as Pittman requested, weighed in the 290s last year for former Arkansas coach Chad Morris.

Stromberg was a starting guard as a true freshman last year, operating now at first-team center flanked by guards Luke Jones (transfer from Notre Dame), redshirt freshman Beaux Limmer and tackles Cunningham and Noah Gatlin. Gatlin, a third-year sophomore from Jonesboro, redshirted after playing four games in 2018 but was sidelined all 2019 by knee surgery.

Pittman likes how the offensive line threw its weight around during Tuesday’s 18 plays of 11 vs. 11 contact, but they lack stamina.

“During the plays, I thought we were going extremely hard,” Pittman said. “But the transition on and off the field was slow. A jog off the field, to me, I’m not benefiting while I’m out to practice. I need to run off the field so I can use that extra conditioning, as well. But I did think they played awfully hard between the whistles.”

“Jerry Jacobs had a wonderful practice Tuesday,” Pittman said. “He was all over the field. Certainly Mo Brown has been really good, a consistent player.”

DAY 1 ASSESSMENT
“I thought our ball security was good," Pittman said. "I thought everybody played awful hard today. I liked the physicality of the practice, because that’s what we’re preaching: toughness, strength, mental toughness. I thought guys tried to fight through practice a little bit more than what they had in the past.”

Graduate assistant Ryan Yurachek and Joseph Henry in quality control do most of the O-line coaching in Davis’ absence, Pittman said

“I’m over there helping them out a little bit, but they’re doing a nice job of meeting with them and coaching them,” Pittman said. “I think if I took them completely over, I don’t want to lose any of the trust that Coach Davis had with them. I think Coach Davis will be back in the next couple of days, maybe a week at the longest.”