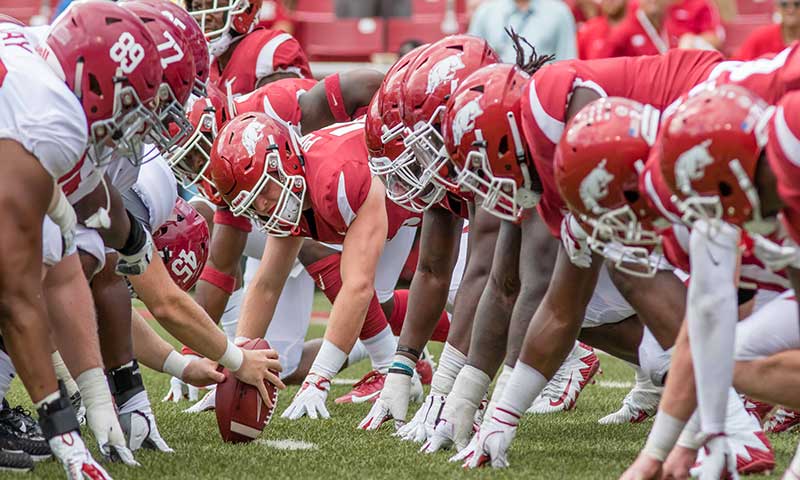 FAYETTEVILLE - Not even nationally elite SEC West rivals  Alabama, Auburn and LSU, routed the Razorbacks during their two-year Chad Morris regime as Mississippi State did.

Leading a not insurmountable 17-3 at half in 2018, Mississippi State annihilated Arkansas 52-6 in Starkville. Last year in Fayetteville, the Bulldogs reversed their bite. Their 24-point second quarter built a 38-10 halftime bulge. The final was 52-24.

“We’ve never mentioned (the past two years),” Pittman said. “It doesn’t have anything to do with us. It’s a whole different, new team. New staff. A lot of new players. We’re trying to set our own goals. So, no we never have mentioned it.”

The Razorbacks, losers of 20 consecutive SEC games dating back to the final three league games in 2017, inspired hope last week in Pittman’s debut. As a four-TD underdog, they led No. 4 Georgia 7-5 at half and 10-5 midway through the third quarter before falling in an avalanche of offensive miscues, special teams mistakes and Georgia’s superior size and talent.

Against LSU, Costello attempted 60 passes. He completed 36 for an SEC-record 623 yards and five TDs.

“Costello, he was incredible,” Pittman said. “Every throw was very poised.”

“They’ve got a lot of receivers who can make plays,” Pittman said.

The Bulldogs’ offensive line, led by center Cole Smith, did its job in Baton Rouge.

“I feel like Coach Odom is going to have us in the right spots,” Arkansas safety Simeon Blair of Pine Bluff said. “As long as we do our assignments and play as hard as we can, I feel like we’re going to get the result we want.”

Arkansas’ young offensive line, overmatched by Georgia’s huge, veteran defensive line, should be more in its league in size and strength against State, but the Hogs must counter the Bulldogs'  stunts and twists that resulted in seven sacks at LSU.

Arkansas must establish preseason All-SEC second-team running back Rakeem Boyd, which the line could not do against Georgia. With no running game, the Hogs stayed on the field just 24:14 to  Georgia’s 36:16. They can’t allow Costello that kind of time to pass it around.

Other than Treylon Burks (seven catches for 102 yards), the Hogs couldn’t get receivers consistently open against Georgia as targets for quarterback Feleipe Franks. Six other UA receivers and running backs combined for 13 receptions, 101 yards and no TDs.

Pittman said the offense must help Franks by getting correctly aligned quicker than they did against Georgia.

“I know that’s part of the quarterback’s job,” Pittman said. “But it’s hard to look downfield, see what’s going on, see pre-snap reads as a quarterback when you’re looking at your own team trying to get them lined up. And so that has been a big emphasis, paying attention to the signals, getting lined up fast.”