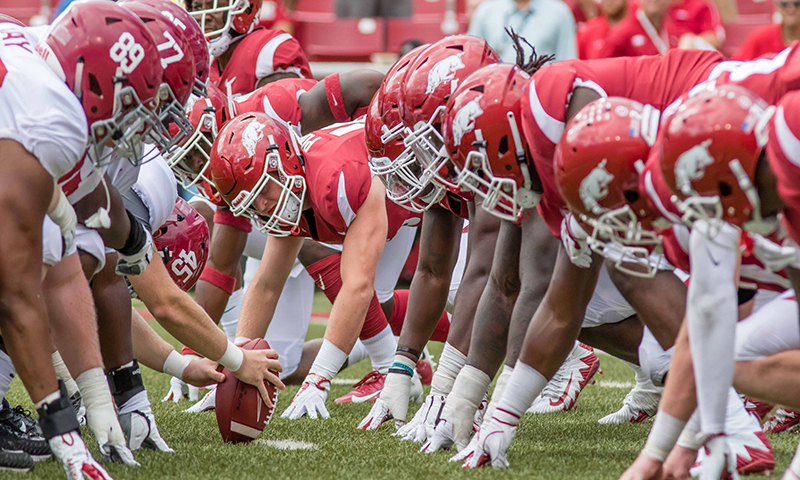 Including graduate transfer quarterback Ben Hicks of SMU, Arkansas coach Chad Morris and his staff have signed 26 to 2019 scholarships and have room to sign three more on the 85-man roster for 2019.

Jalan Catalon, out for 2018 upon tearing his ACL in the season-opener but nationally coveted nonetheless, committed to Arkansas in January and stayed with his commitment to sign Wednesday.

Spivey had committed to and stuck with Arkansas despite being  recruited hard by Ole Miss.

Hudson Henry hails from one of the Razorbacks’ foremost families. Mark Henry, Hudson’s father, started at center for the Razorbacks in the 1980s and ’90s. Oldest brother Hunter Henry was voted the Mackey Award as the nation’s outstanding tight end while earning All-America honors under former UA coach Bret Bielema in 2015, and older brother Hayden Henry lettered at linebacker for Morris’ Razorbacks last season.

“We know his family and the legacy they have,” Morris said. “We know what Coach Kelley has done there, and man it’s just been phenomenal of this young man, 6-5, 235. I feel like he’s going to come in and make a major impact watching him and the success he’s had.”

Burks (6-3, 225), injured in 2018, was still rated the top player in the state by 247 Sports off his outstanding 2017 year at receiver and linebacker. He will open as a receiver during August preseason drills.

“Just been a fantastic player,” Morris said. “Obviously suffered an injury this year but just a great young man.”

Arkansas needs running back depth. Spivey should supply some of that, and wedges Arkansas’ foot in the door at one of Alabama’s most prestigious high school programs, Morris said.

“A’Monte Spivey, a running back from Central High School in Phenix City, Alabama, a traditional powerhouse and won a state championship this year,” Morris said. “Absolutely a dominant program in that state. I’ve got great connections there, and this definitely continues to open up a pipeline to get kids out of the state of Alabama. I’m extremely excited about him, a 6-1, 208 running back, a big, physical back.”

Wednesday offered Morris the first opportunity with media to discuss Hicks, recruited to and redshirted at SMU in 2015 by Morris then blossoming to be Morris’ starting SMU quarterback in 2016 and 2017 and starting again in 2018 for current SMU coach Sonny Dykes.

“He was with us three years at SMU,” Morris said. “The all-time leading passer. Excited to have his leadership, his competitiveness in our program. He’s done a great job getting in and building those relationships.”

“With the new additions to an already strong class for 2019, we got better today without a doubt,” Morris said. “Being here one full year and going through one full year of a recruiting cycle, to be able to sign the class that we signed, I’m excited about the future of 2019 and the Arkansas Razorbacks.”

With three scholarships left, Morris said 2019 recruiting is not necessarily complete. Morris is ready to add a linebacker and quarterback, but he's cautious about signing players just because he can.

“We're not gonna get in a hurry just to fill spots,” Morris said.  “That's the one thing I've found in this business you can get yourself in trouble in. If we find the right fit for us, we will fill it, but if we don't then that's OK.”

Morris has one full-time assistant position to fill since defensive tackles coach John Scott, a South Carolina native, returned to his native state to the coach the defensive line at the University of South Carolina.

“There is a possibility of that, or a special teams coordinator who will coach a position as well,” Morris said. “There’s different options there. We hope to have a replacement definitely before the start of spring ball.”