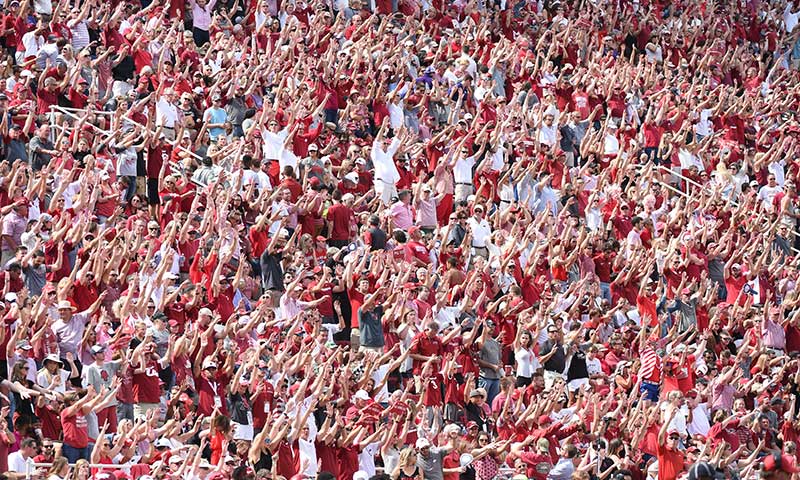 FAYETTEVILLE - After Wednesday’s practice, most of Arkansas’ defenders will exit for spring break feeling better about themselves than the Razorbacks on offense.

The Razorbacks’ seventh of allotted 15 spring practices will be their last until March 26 with the UA starting spring break after Friday’s classes.

The defense got the best of it in Wednesday’s practice, earning the championship belt that UA head coach Chad Morris awards to the better after each practice.

“Not good,” Arkansas senior offensive tackle Colton Jackson said Wednesday when asked about the offense’s performance. “We just didn’t come out. We just weren’t ready to go today. Defense came out today, and they just manhandled us. We’ve got to come back after spring break and not let that happen again.”

Chase Hayden, the only scholarship running back working at the offense’s most depleted by injury position, said the offense got blitzed Wednesday.

“They sent a lot of  blitzes we weren’t prepared for,” Hayden said. “We didn’t get a lot going today and that’s pretty frustrating. But we’ll just keep it in the back of our head and come out and compete when we get back from break.”

The break comes at good time to heal “the dinged-up,” Hayden said and renew for the final eight practices.

ON A TURNOVER ROLL

Defensive coordinator John “Chief” Chavis and the defense likely would have wanted no break and keep Wednesday’s turnovers rolling.

“We had four turnovers as a defense,: sophomore cornerback Jarques McClellion said. “We just played fundamentals, the way Coach Morris always wants. And Coach Chief and Coach (Ron) Cooper are always telling us in meeting to strip the ball. Get that lawnmower right, try to get the ball every chance we get, try to get at least three turnovers in a practice. That’s how we got this belt right here.”

Junior safety Kamren Curl said the turnovers were all fumbles.

“B (walk-on defensive back Brenden Young) had a big hit.” Curl said. “He knocked the ball loose and that set the tone for practice. Buster (cornerback  Montaric Brown) forced a fumble, and we scored when (senior defensive tackle) T.J. Smith scooped it and got to the end zone.”

December high school graduate defensive backs Devin Bush of New Orleans and Greg Brooks of Harvey, La., enrolled at the UA in January and are practicing this spring.

“Devin and Greg are two special DBs,” McClellion said. “Watching them play and knowing I have those two DBs behind me, it is just a blessing. We are looking at it as we tryi to be DBU (Defensive Back University), and we are trying to wake up a lot of people. Especially after last (2-10) season, we have so much on our shoulders and so much to prove.”

“New defensive tackles coach is so different (in his) style of coaching,” Smith said. “Definitely an emphasis on fundamentals. A lot of the emphasis is just ball get-off, keying the ball, attacking the line of scrimmage, playing on their side of the line of scrimmage and just being aggressive. Getting that, just creating that mentality.”

Running back Devwah Whaley and tight end Grayson Gunter, both injured during Saturday’s scrimmage, did not practice Wednesday. Redshirt freshman offensive tackle Noah Gatlin of Jonesboro is two practices returned from the flu that sidelined him all last week.