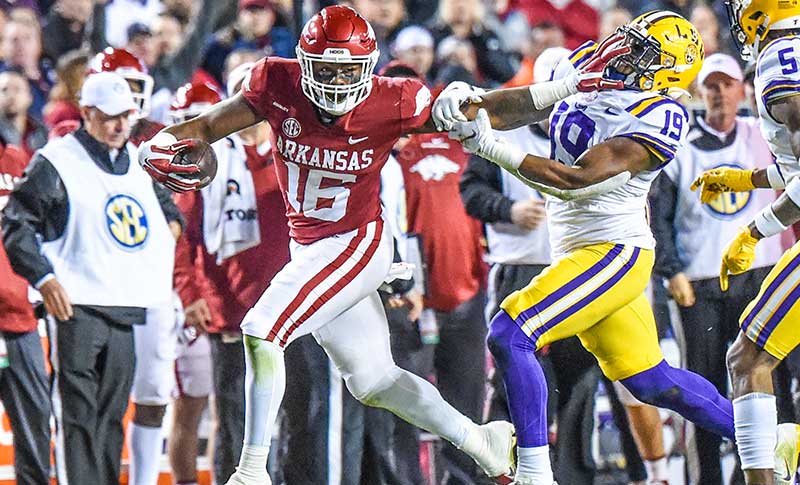 FAYETTEVILLE — Transferring to the University of Arkansas turned out to be a natural choice for former Oklahoma wide receiver Jadon Haselwood.

Arkansas head Coach Sam Pittman was in charge of Georgia’s offensive line while the Bulldogs were recruiting Haselwood.

And, then, Haselwood sought advice from former Arkansas receiver Mike Woods, who transferred to the Sooners after lettering three seasons as a Razorback.

“I do have that connection with Coach Smith,”  Haselwood said after the Razorbacks practiced Thursday inside the Walker Pavilion. They will resume practice on Saturday.  “I just felt like it really made sense for me to come here.”

“He kind of grew me up and made me who I am today,” said Haselwood, who caught 19 passes as a freshman at OU and four passes in 2020 after missing eight games with injuries. “So I just came to him for advice and he didn’t even really put that pressure on me to even look toward any other school and I just figured it out and came here.”

Haselwood said he was familiar with Pittman after committing to Georgia as a freshman in high school and staying committed until his junior year.

“It was all just kind of connected that way,” Haselwood said.

Woods offered kind words for his old school when asked.

“Mike Woods is one of my closest friends,” Haselwood said. “When he transferred to OU, we took him in as a brother. So, yeah, of course. He was one of the guys I did come to and ask how did he feel. And he told me like, ‘Yeah bro, it’d probably be a great fit for you,’ and I just went with that.”

Haselwood (6-3, 211) said one of the reasons he decided on Arkansas was the void created by the departure of All-SEC receiver Treylon Burks.

“Of course, Treylon Burks is one of a kind,” Haselwood said. “I know everybody expects me to fill his shoes. But you know, like I said, he's one of a kind. So I'm just trying to get in where I fit in and make plays with the team.”

Sanders, a junior from Denton, Texas, said he knew what he was looking for when he put his name into the transfer portal after Alabama’s loss to Georgia.

“I knew I wanted to be a little closer to home,” said Sanders, who totaled 24 tackles with 2.5 tackles for loss in 12 games with the Crimson Tide last season. “A big deal was staying in the SEC too. Arkansas was first on my list.

“That's place I wanted to visit. I kind of wanted to make that transition from playing with my hand on the ground to standing up a little bit. I thought I could fit in the scheme they're running, so they were first on my list.”

Sanders, an outside linebacker at Alabama, has moved to middle linebacker alongside bonus senior Bumper Pool.

“Switching to a whole different position you’ve got a bunch of things you’ve got to change,” Sanders said. “It’s a whole different playing style. You go from like reading one part of the ball to like you’re reading the whole field now. It’s all brand new. You’ve kind of got to work on everything a little bit as much as you can.”

Sanders said playing alongside Pool, a first-team All-SEC player in 2021, has helped ease his transition.

“Every day we kind of make it an emphasis to watch film and him kind of telling me what to do,” Sanders said. “I was really excited to get with a player like him with as much experience as he has and learn from him.”