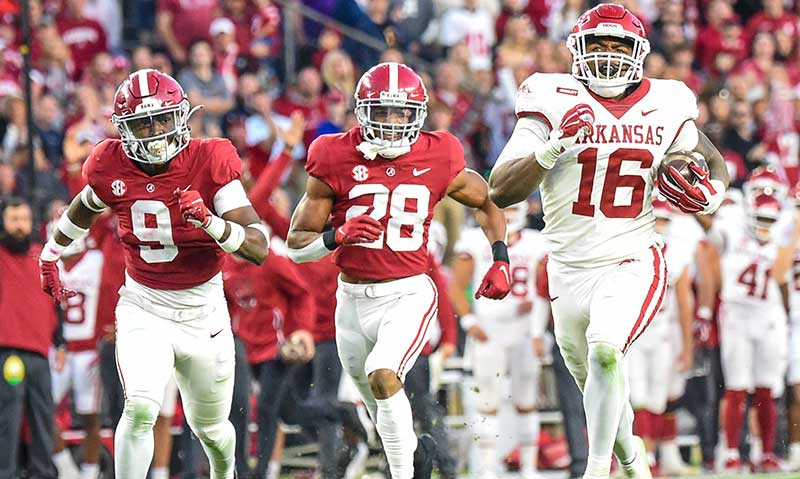 FAYETTEVILLE — The departure of 2021 All-American wide receiver Treylon Burks to the NFL Draft has created increased opportunities and responsibilities for the top pass-catchers on the Razorbacks roster.

Much of the attention this spring has gone to senior Warren Thompson (19 catches, 304 yards, two touchdowns in 2021), sophomore Ketron Jackson (five catches, 97 yards, 1 TD in 2021) and Oklahoma transfer Jadon Haselwood (23 catches, 337 yards in parts of two seasons at OU).

Thompson, a transfer from Florida State, and Jackson said they understand that Burks’ production (66 catches for 1,104 yards and 11 TDs) will not be easy to replace.

“We’re trying to build every day, just trying to build a foundation with consistency and playmaking,” Thompson said.  “We’ve got the ability in the room. It’s not left. We’re going to bring that. We’re building every day.”

Jackson, from Royse City, Texas, said Coach Sam Pittman issued a challenge to the wide receivers before the beginning of spring ball.

Consistency seems to be the key for Thompson, who has recorded Burks-style catches last fall and this spring, but also dropped some he knows he should have caught.

“Focus,” Thompson said. “That’s important ,and that’s what we try to focus on every day. I know I do. It’s important to get your head around and look for the ball and locate the ball and hand-eye coordination.  I know I can do better, and I’m going to make that my mission to be better and win a lot of games.”

Thompson came to Arkansas as a walk-on before being placed on scholarship by Pittman.

“This spring I wanted to accomplish just being more comfortable,” Jackson said.  “Last year I didn’t feel as comfortable playing on the field. I was getting used to my body. I was coming off an injury. I just wanted to get more comfortable and get used to it because I know what role I have to step up and fill. It’s just me bringing it every day, practice getting better day by day.”

“Every day is a game rep,” Jackson said.  “We love the fans coming out, but it’s about us getting better every day.”

Thompson and Jackson were asked about Malik Hornsby, the backup quarterback so fleet that he’s also practicing some at receiver.

“Malik brings a lot of explosive plays to the outside, man,” Thompson said.  “He’s just fast, like next-level fast.”

Both also touted Haselwood, who on Thursday shed the green no-contact jersey he’s been wearing while recovering from a shoulder injury.

“They got me on the right track and they just kept me there and ever since then I’ve been on a roll,” Paul said.  “Playing behind those guys was a true blessing for me.”

Senior defensive tackle Isaiah Nichols of Springdale was asked about the Razorbacks using more four-man fronts to go along with the three-man fronts defensive coordinator Barry Odom mostly relied upon the past two seasons under Pittman.