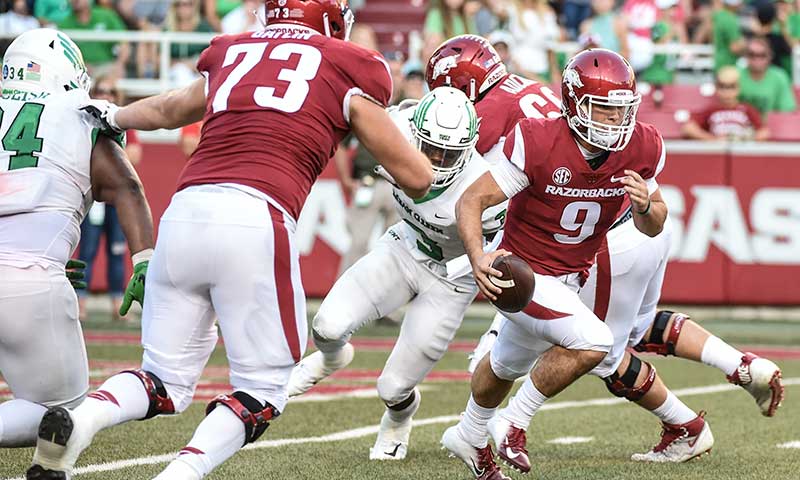 "John Stephen got in on the second series, and he led his group down and scored," Morris said. "He showed just his ability to make plays happen when the pocket breaks down with his eyes down the field."

"I thought John Stephen started it off for the most part," Morris said. "He led us down on a seven- or eight-play drive with a touchdown pass. From there, it just kind of caught fire with some guys making plays."

Morris said running backs Devwah Whaley and Chase Hayden and Trelon Smith scored rushing TDs. Smith will redshirt as an underclassman transfer from Arizona State but is impressing the staff and teammates for 2020.

"This kid’s got a chance to be really special," Morris said. "He showed flashes today."

Linebacker Hayden Henry was impressed, too.

"He's like water," Henry said. "He slips through the cracks, every play. He's a very dynamic back. Too bad he has to sit out this year because he could be a really good player for us."

Regarding the QB battle to start the Aug. 31 season-opener against Portland State, it likely goes another week through next Saturday's scrimmage.

"I was pleased with all of them," Morris said. "Those guys are responding. They’re challenging each other."

Consistency, Morris said, will separate the QBs and the ability to respond to adversity. “Maybe it’s a different group ou’re not used to leading,” Morris said. “Just consistency all across the board."

Morris also noted true freshman QB Jefferson, who continues to impress. "He’s physical and big and really good in his decision-making,” Morris said. “And he showed that today. I was pleased with where all four of them are right now. We’ve got a great competition going."

Morris said both sides of the ball competed in the high heat and humidity.

Defensive coordinator John Chavis goes into every game and scrimmage seeking at least three turnovers from his crew. They netted two Saturday. Morris cited an interception by cornerback Montaric Brown and a fumble recovery by freshman defensive end Zach Williams.

"I thought Jarques continues to get better," Morris said.  "He made some great play on the ball today. Buster's the same way."

The defense might have increased the pressure for turnovers had its senior stars (middle linebacker Scoota Harris and defensive tackle Sosa Agim of Hope) played more than a series or two before being pulled.

"When they were in there, they were very disruptive and active," Morris said. "We limited them today. We know what they can do. Then they got an opportunity to start coaching some of those young guys on the sidelines. That was good to see."

Chavis reiterated that "two turnovers weren't enough" for his defense to muster in 175 plays.

"I just got out of practice and weighed 277," Smith said. "Last year toward the end of the season I was like 310. That was a focus, just getting my body where it needed to be to play fast. I'm moving a lot better and a lot more agile, and I'm able to last a lot longer."

The Razorbacks take Sunday off and start Monday what Morris calls a crucial week of practice, closing with the last major Saturday scrimmage of the preseason.