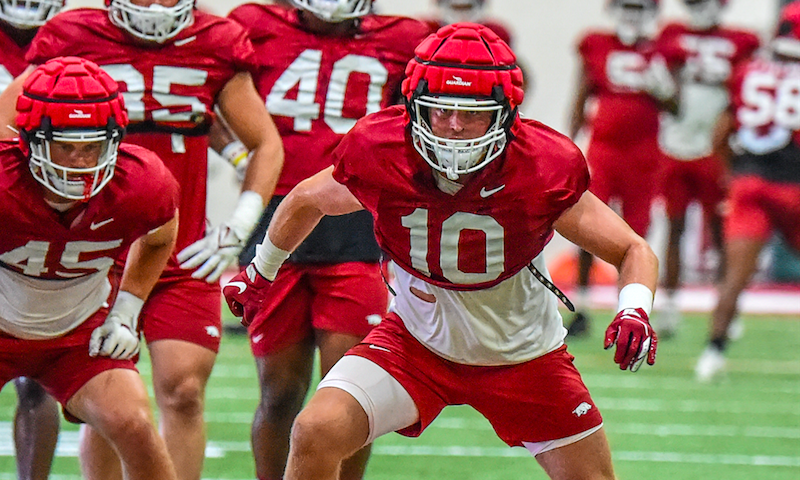 “I tore some stuff up in my elbow, on both sides,” Morgan of Greenwood says. “Nothing that required surgery because I ended up playing for 11 weeks with it torn. Just played with pain, I guess. I’m just glad I was still able to tackle.”

And though graduated with a bachelor’s and a masters, and eventual med school goal to be an orthopedist,  Morgan relishes  playing again as a sixth-year senior granted a bonus 2021 option granted to 2020 seniors because of last season’s Covid-19 disruptions.

“Grant is not only the leader in our room, he's the leader of our team,” linebackers coach Michael Scherer says.”  It's just who he is.”

He missed only the next game though of course the ribs weren’t close to fully healed as he played on, making 101 tackles second only to Morgan’s team-leading 111.

He was about the last bonus senior to return, but return Henry did  though already with degree in hand.

“There got to a point at the end last season where I was really in a lot of pain, and I didn't know if I wanted to keep doing it,” Henry said.  “But  I got in the real world and I was like, 'Man, I really miss football a lot.' So I just made it my mission to get strong again. I can thank Coach (Jamil)  Walker and the rest of his (strength and conditioning) staff for that.”

Withheld from much contact last spring, Henry has been full go this preseason.  He will pop pads with the rest. After Wednesday’s off day, Thursday marks the preseason’s first practice in full pads with the first of two full-scale preseason scrimmages looming Saturday.

The guy that the Pittman staff always uses as a recruiting weekend host.

But of course he wants to play.  And with the chance to play elsewhere of course he eyed the transfer portal last winter.

All understood, but all did their utmost to make him feel wanted.

“As soon as I had an idea that I might be here, I made sure that we called Dee Dee,” Scherer said.  “We made sure that he didn't want to go anywhere, because we need him.  Our team loves Dee Dee. He adds a special dynamic to our linebacker room.”

And on the field, Scherer said after coaching Edwards last spring and this preseason.

“You have Grant, you have Bumper, you have Hayden Henry who is playing really good,” Scherer said. “Throw Dee Dee Edwards in there and (junior 2-year letterman )  Andrew Parker, that's five really solid guys who can go in a game at any time.”

BIG BACK AT TIGHT END

The Razorbacks have at least one big back, freshman Raheim “Rocket” Sanders, 6-, 220, behind 5-9, 190 starting running back Trelon Smith should Johnson remain at tight end.