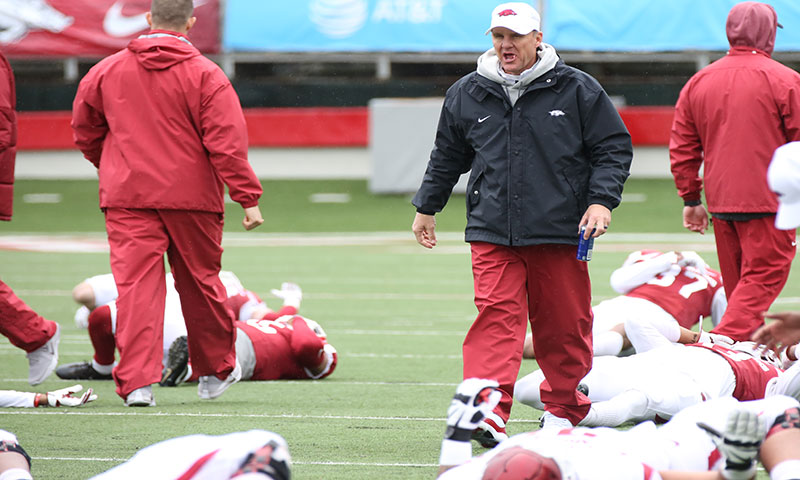 Unless the diagnostic part of their surgery indicates otherwise, Morris believes O'Grady and Capps should return as the Razorbacks open their season Aug. 31 hosting Portland State at Reynolds Razorback Stadium with Jackson due back a week or so later.

"CJ should be back in about two weeks we’re anticipating," Morris said. "He had just a knee sprain. Austin Capps same thing. Something that had been bothering him a little bit. He should be back by the first game. Koilan Jackson, Koilan may be three and a half weeks or so, it’s a reoccurring (meant recurring) injury, from the same knee. He’ll be fine. Just going in and cleaning a few things up. "

"We just pulled him back today," Morris said. "And Britto Tutt (the often injured senior defensive back) same thing."

O'Grady, 30 catches for 400 yards last season but briefly demoted to third team this August as Morris challenged him to increase concentration, had run first-team in the recent closed practices, Morris said.

RESHUFFLED LINEUP
With O'Grady out, Henry was a welcome addition to a tight end corps that for starts with fourth-year junior Grayson Gunter and senior second-year transfer Chase Harrell, formerly a wide receiver at Kansas and a wide  receiver at Arkansas last season.

"It was good to have Hudson Henry out there in full-go today," Morris said. "Chase Harrell continues to impress us at the tight end position. Grayson Gunter’s having a really good camp, and Blake Kern (a walk-on but considered the best blocker among Arkansas' tight ends) is really stepping up."

Gunter would have the starting nod for now, Morris said,  if O'Grady isn't full go against Portland State. Running back T.J. Hammonds remains under concussion protocol but is expected back soon.

GOALS TUG OF WAR
A head coach's inevitable split personality regarding his offense vs. defense' practices and scrimmage manifests in his offensive staff's and defensive staff's conflicting goals.

The offense strives for no turnovers, which they achieved earlier this week, to win the belt awarded by Morris to the best faring unit after practice.

Morris said the defense got one each today at the expense of quarterbacks Ben Hicks, Nick Starkel and John Stephen Jones and thus claimed Wednesday's belt.

Scrimmages Saturday and next Wednesday mark the hardest practices and likely will do much to determine the starting quarterback vs. Portland State.

"We've got two really good opportunities ahead of us, and we've got some live situations that we'll get into," Morris said. "We'll end up announcing it (starting quarterback) at some point."

"He had an unbelievable day today," Morris said citing the past two days as Knox's best this August. "He hasn’t been as consistent as I wanted him to be during camp. We’ve challenged him a little bit, but that comes with being a freshman."