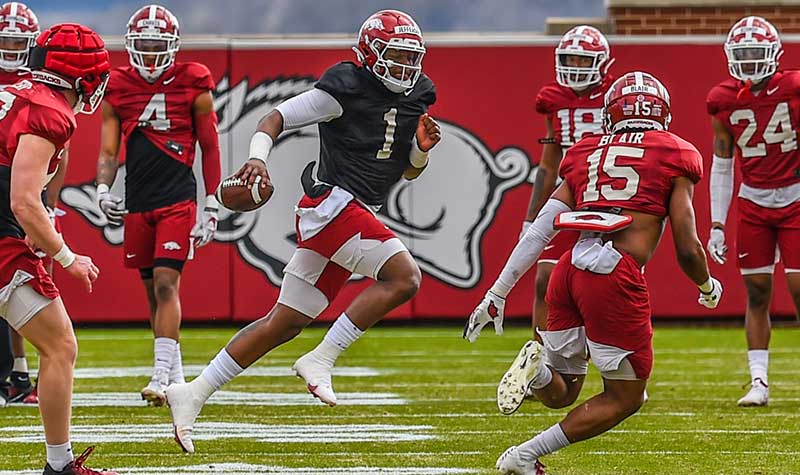 It marks the final full-scale scrimmage of the preseason with one more week remaining before Arkansas opens the season at 1 p.m. Sept. 4 against visiting Rice.

Arkansas coaches are conscious of even slightly injured regulars like Smith as the opener approaches. So, Saturday’s scrimmage creates an ample opportunity for freshmen running backs Raheim “Rocket” Sanders of Rockledge, Fla., and AJ Green of Tulsa.

A December high school grad recruited as a wide receiver, Sanders (6-2, 225) shifted to running back last spring and seized the opportunity among other inexperienced alternatives for No. 2 consideration behind Smith.

GREEN FULL GO
Green, the UA's most touted pure running back in the freshman class, played for Tulsa’s fabled Union High. Due to injuries, Green has practiced just four of Arkansas’ 13 August practices and did not play in last week’s first preseason scrimmage.

“It's huge,” Briles said of Saturday’s scrimmage as Green’s first real test. “He's back healthy. Today was AJ's fourth practice. He came back rusty yesterday (Thursday). We'd like to see what he can do and how he protects the football.”

Green will work behind Sanders and Josh Oglesby, a converted sprinter from the track team, and possibly Smith.

“Trelon will be out there tomorrow, but I don't know how much we're going to give him,” Briles said. “We're going to back off on a couple of guys who have had some things nagging on them. Rocket will see a lot of carries. He's done a really nice job for us."

“Coach Smith has done a great job with him,” Briles said.  “He is a 226-pound kid who can really run. When he gets in the open field, he’s a home run back. Very, very tough player. He runs in between the tackles. Arm tackles aren’t necessarily going to bring him down. And he’s done a great job this week with his pass protection.”

“Raheim is coming along,” Jefferson said. “Trelon Smith helping him is a big deal along with all the running backs keeping him after practice and going over signals and stuff, trying to make sure if he (Trelon) goes down, the next one up will be confident and ready. AJ Green, I’m excited to see what he brings in a full scrimmage.”

STAY CAUTIOUS
To keep their QBs intact, particularly Jefferson as the lone QB in camp (two starts in two years) with more than a smattering of game experience, the QBs all practice and scrimmage in don’t-hit-them caution jerseys.

Jefferson, recruited as a running QB, won’t don that “don’t hit me” garment against Rice.

"It’s a transition and you can’t recreate it,” Briles said. “These kids have been playing football their whole lives, so they understand what’s different when you’re getting hit. It’s all about ball protection.

"A lot of times for kids who haven’t been hit and are used to being hit, they want to be hit. They want to have that first tackle. It kind of knocks the rust off them.”

While Jefferson was recruited by the previous Chad Morris regime as a running QB, Pittman and Briles are well aware of the lack of experienced depth behind Jefferson.

“I don’t want to say we’re just going to run him a bunch,” Briles said. “That’s not what we want to do offensively.  But things happen pre-snap, post-snap that are going to allow him to carry the football. I like the fact you got a guy back there, that if things do break down, he can create. Those are things God gave him the ability to do, and he does it.”

NO BIG DEAL
Carrying a listed 245 pounds on his 6-3 frame, Jefferson looms larger than many trying to bring him down.

Both Briles and Jefferson say they want the QB trimming to 235, though Briles said that’s not a major concern.

“He’s now under 245,” Briles said. “He can run, and he can move and he’s got a first step. So, I’m not really concerned with it. I don’t care if he’s 285 as long as he’s dropping dimes on people and getting away from pressure.”