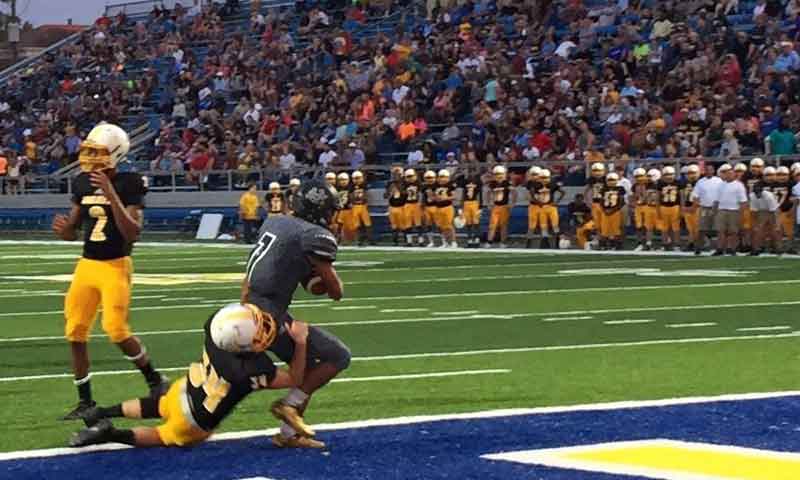 MAGNOLIA - Smackover senior Corbin Lee (in photo) rushed 19 times for 120 yards and a fourth-quarter touchdown Tuesday as the Class 3A 12th-ranked Buckaroos downed Class 2A No. 3 Camden Harmony Grove 14-6 at SAU during the second night of the Arkansas Blue Cross and Blue Shield Kickoff Classic.

In the nightcap, Class 3A No. 1 Prescott stuffed 2A No. 4 Hampton 30-6. Prescott held Hampton to 21 first-half yards, but Hampton junior QB Gauge Welch ran 12 times for 54 yards for the game. Hampton junior tackle Desmond Brown wreaked havoc up front with 10 tackles, four tackles for loss and three sacks. Prescott senior QB Cade Haynie completed seven of 12 passes for 111 yards and a TD.

On Monday night, Pea Ridge senior Drew Winn rushed for 155 yards and four touchdowns, and senior quarterback Jakota Sainsbury completed 13 of 15 passes for 218 yards and three TDs as Class 4A No. 2 Pea Ridge dispatched of No. 10 Hamburg 50-30 in the opening game of the Arkansas Blue Cross and Blue Shield Kickoff Classic at UCA.

“We appreciate Arkansas Blue Cross and Blue Shield affirming youth across the state and being involved in a positive activity like high school football,” said Chad Hooten of Hooten’s Arkansas Football. “Not only do all eight teams start the season in grand style at college stadiums, but Arkansas Blue Cross enables the players, cheerleaders and band members to help their communities while having a lot of fun before the games with the Forth and Fearless Pep Rallies with a Purpose.”