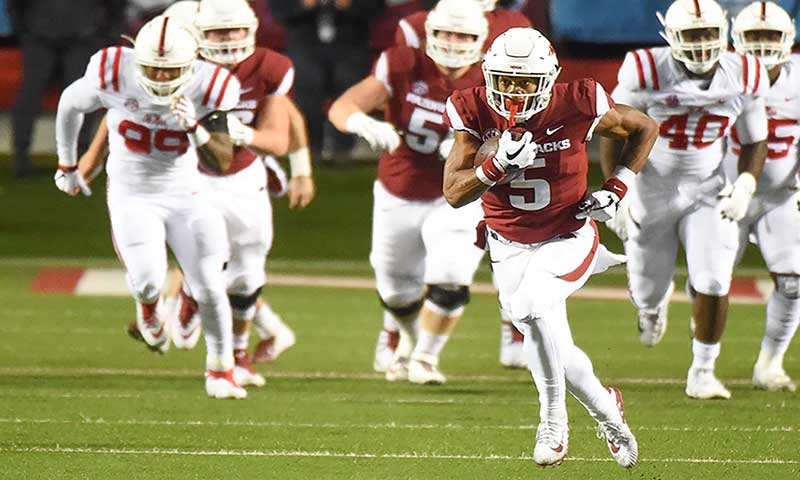 FAYETTEVILLE - As a 28-point favorite, the Arkansas Razorbacks of the elite SEC open their season Saturday by playing host to the Portland State Vikings of Portland, Ore., and the lower Football Championship Subdivision’s Big Sky Conference.

Game time is 3 p.m. Saturday at Reynolds Razorback Stadium and will be televised by the SEC Network.

“I'm sure Arkansas' threes are more excited than their ones and twos with us coming in," Barnum quipped wryly earlier this week. "Those guys are calling their girlfriends and moms and grandparents and saying, 'I'm going to get to play Saturday.”

The Hogs easily might look ahead to their anticipated Sept. 7 SEC opener at Ole Miss, but Arkansas senior middle linebacker De’Jon “Scoota” Harris warns they better not.

The Mean Green of North Texas foretold Arkansas’ 0-8 SEC season in 2018 as the underdog embarrassing the ultimately 2-10 Hogs, 44-17 in Fayetteville three games into the 2018 campaign. Even in last year’s  opener, Eastern Illinois picked up 21 first downs to Arkansas’ 18, converted three of four times on fourth down, and out-rushed the Hogs 127 yards to 80.

Both are expected to play Saturday.

“He has NFL talent. There's no doubt about that,” veteran Arkansas defensive coordinator John “Chief” Chavis said. “He’s a really good player, and I think he will end up having a long career in the NFL.”

Ben Hicks, the graduate transfer QB from SMU, reunites with Morris and Joe Craddock, the former SMU offensive coordinator/ QB coach performing both tasks at Arkansas, as today’s starting quarterback. Hicks says he debuts against a Vikings defense that “plays hard from an awkward scheme.”

Morris says PSU’s defensive scheme looks awkward to today’s QB because it’s a scheme seldom seen now but once was “the rage” as the “Flex Defense” popularized late in the Tom Landry’s Dallas Cowboys coaching era.

“Back in the day that was a really popular defense,” Morris said. “They’ve done a great job of ‘this is who they are and this is what they believe in.’ They can do some things that get your rules kind of off guard a little bit. You’ve got to be on point with the way they align. For the most part that’s kind of what their base is and that’s what they do. They like to play a lot of man coverage behind it. When they do that, obviously you’re going to see pressure coming from different areas.”

Not just because they couldn’t be much worse than last year’s 2-10, Morris believes these Hogs will be much better this year.

Running back and leading returning rusher Rakeem Boyd and starting defensive end Dorian Gerald have a full season and preseason behind them. Last season, they arrived as academically cleared junior college transfers after the August preseason began and had to learn the playbook on the job.

The defense, staying first-team intact since spring ball and led by preseason All-SEC senior tackle McTelvin “Sosa” Agim and preseason All-SEC middle linebacker Harris, should be vastly improved as do the special teams.

Agim and Harris are permanent game captains and will be joined each game by an offensive captain starting Saturday with senior left offensive tackle Colton Jackson of Conway.