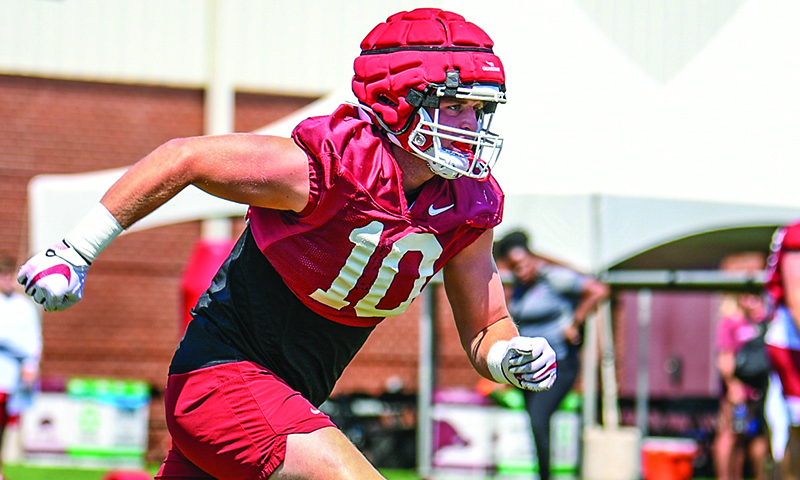 Fayetteville — It's been eight months, but there is an Arkansas football game on the immediate horizon — 2:30 p.m. Saturday against No. 23 Cincinnati at Reynolds Razorback Stadium.

Arkansas Coach Sam Pittman went to the podium Monday afternoon to provide information on how his 19th-ranked team is preparing for its matchup with the Bearcats, the Razorbacks' first game since last season's victory over Penn State in the Outback Bowl.

Questions at Defensive Back

“We’re still trying to figure out exactly what we’re going to do,” Pittman said. “We obviously know that they are all going to play.”

Two of the most celebrated arrivals from the transfer portal — wide receiver Jadon Haselwood (Oklahoma transfer) and linebacker Drew Sanders (Alabama) — are listed at No. 1 at their respective positions.

Pittman said Sanders, who played outside at Alabama, has worked inside since he arrived in Fayetteville in time for spring drills.

“He just hasn’t played inside the box much,” Pittman said of Sanders, who accounted for 24 tackles in two seasons at Alabama. “In college, he’s been mostly an edge guy. Obviously, he has taken a lot of reps inside. We feel like he’s ready and I’m sure he is ready. I look forward to him having a really good game.”

Cincinnati comes to town Saturday ranked No. 23 in the latest Associated Press Top 25 poll after becoming the first team from outside the Power 5 conferences to make the College Football Playoff.

The Bearcats saw nine of last season's players taken in the NFL Draft, and Pittman said there will be an element of surprise for the Razorbacks with so many new players on both sides.

The Bearcats have a wealth of experience across the offensive line, giving them a solid foundation.

“I know people say they lost a lot of players,” Pittman said. “Well, they played a whole bunch of them last year because they were so far ahead in a lot of their games that they got experience with their other guys. And then they brought in some nice transfers as well.”