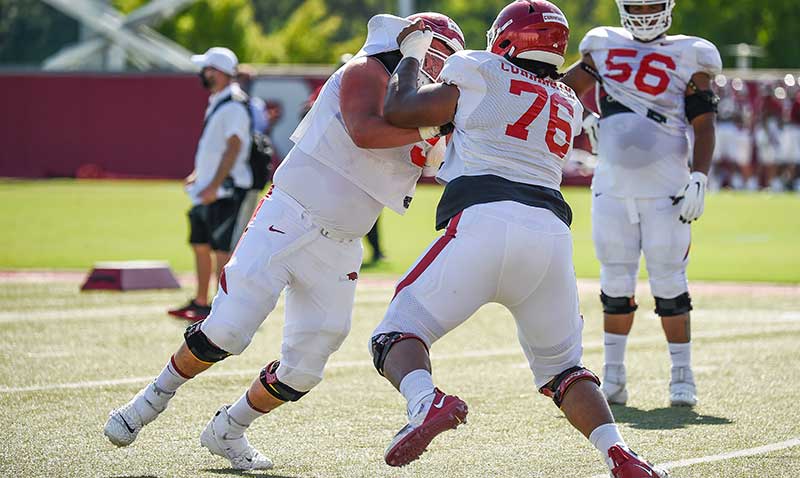 Pittman on the linebackers: “We haven’t really had a guy showing ‘This is my job, and I’m going to take it from you.’ That position is still a wide-open position of who’s going to be our starters.”

Pittman expected to see some things crystalize among the linebackers after reviewing the scrimmage video.

On Tuesday, however, Pittman said: “Well, I think that’s a position, one of the positions that we have to become a more physical group. We have to go make plays. That’s what linebackers are supposed to do. We can’t run into an offensive lineman and not shed him and make a play. That’s something we did not do Friday, and we’re certainly working on it.”

“You can’t just say, ‘OK, well we’re going to go out there and do the same thing and get better,’” Pittman said. “You can’t bench everybody and be mad at everybody. You have to make specific drills for those guys to get better. We had some live drills today with the tight ends and the linebackers. We have to become a more physical team. That group (linebackers) is willing, and they’re physical. We’ve just got to get them to shed blocks and make tackles.”

“I think they know I think they have to become better blockers,” Pittman said. “Again, you can't just sit here and talk about, 'Well, guys have to get better.' You have to give them opportunities to get better, and you give them opportunities as individual to get better. We've made a big emphasis on them and the linebackers. We put them together today, and the bottom line is it's just the strain of the finish. It's the wanting to whip another man's tail. We’re getting closer with that tight end group."

Individually, cornerback Montaric Brown and defensive ends Dorian Gerald and junior college transfer Julius Coates have drawn Pittman praise most every scrimmage, but it was the offensive line and the offense’s endurance over the defense in Friday’s 90-degrees plus scrimmage on the grass practice field drawing Pittman’s plaudits on Tuesday.

“I thought our defense fatigued faster than our offense,” Pittman said, “and therefore they got outplayed. They had not been that way necessarily in the practices. So I anticipate that being amped up quite a little bit on Friday for our next scrimmage.”

The offense line drew Pittman’s praise for Friday’s scrimmage, but apparently was bested by the defense Tuesday.

“I think Clary brings a lot of experience to the O-line, and we are looking at him as a possibility as a guard along with Luke Jones as a guard and a center,” Pittman said. “And Clenin as a guard as well as a center.”

Safety Jalen Catalon, requiring minor arthroscopic knee surgery after preseason drills began, is back in full pads and will scrimmage Friday. “Catalon is doing a real good job back there,” Pittman said.

“He got dinged up in the scrimmage, so I don't know how long he's going to be out,” Pittman said. “But before his injury, he was a great addition to the team. He's very tough, obviously very fast.”