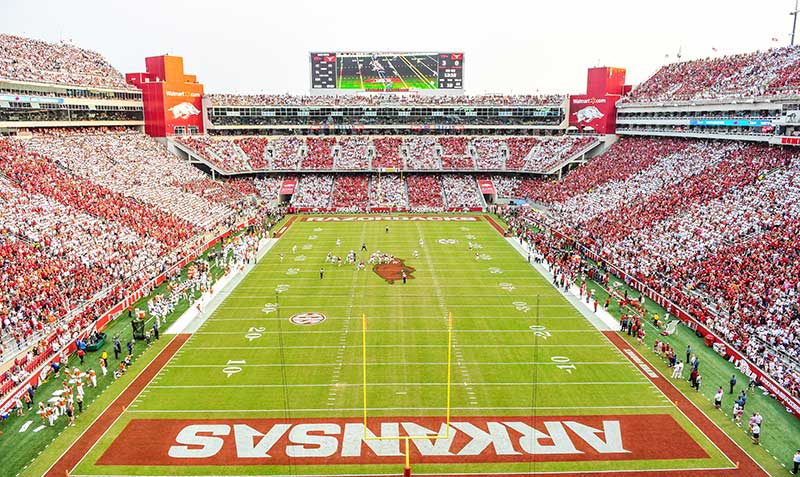 FAYETTEVILLE — Reynolds Razorback Stadium will serve as a proving ground on Saturday afternoon for the Arkansas Razorbacks and the Cincinnati Bearcats.

Arkansas, entering the season ranked 19th in the Associated Press Top 25,  comes off a 9-4 season, its first winning record and bowl appearance since going 7-6 and making it to the Belk Bowl in 2016.

Cincinnati, sitting at No. 23, became the first team from outside a Power-5 conference to qualify for the College Football Playoff, ending last season at 13-1 after a 27-6 loss to Alabama.

Arkansas head coach Sam Pittman said Wednesday the Hogs must be ready to go at the outset, unlike last season when Arkansas rallied from 10-7 halftime deficit to beat Rice 38-17.

Starting fast has been a point of emphasis as Arkansas prepares for Saturday’s season-opener.

his has led to a big emphasis on fast starts during this week’s practices.

“We’re trying to do some different things,” Pittman said. “We’ve certainly made a press towards that coming off any water breaks trying to get into a fast pace. We know what our weaknesses were from a year ago and we’re trying to attack them and hopefully it works.”

A key matchup Saturday will be Arkansas’ rebuilt defensive line going against a Cincinnati offensive line that returns all five starters from last season.

“If you look on paper they’re way ahead of us,” Pittman said. “They have five starters coming back and we don’t. On paper we lost all three of our starters (Ridgeway, UST, Williams). But we have a plan certainly against their offensive line. We think we can have success as long as we can execute it and play hard. That’s going to be a big challenge.”

Pittman said he loves the moments leading up to a college game and the post-game celebrations after a victory.

“I love Saturdays before we go out, and it’s 30 seconds, 35 seconds,” says Pittman. “You can feel it and what’s getting ready to happen, and you can feel the excitement on the kids.

Pittmans said there is nothing like a coach entering a winning locker room.

“I like to win and go into that locker room and see those kids,” Pittman said. “It’s priceless. There’s nothing in the world that can buy it. When I get to go in there and brag on our coaches and see their faces and see the kid’s faces of hard work that’s why you coach.”