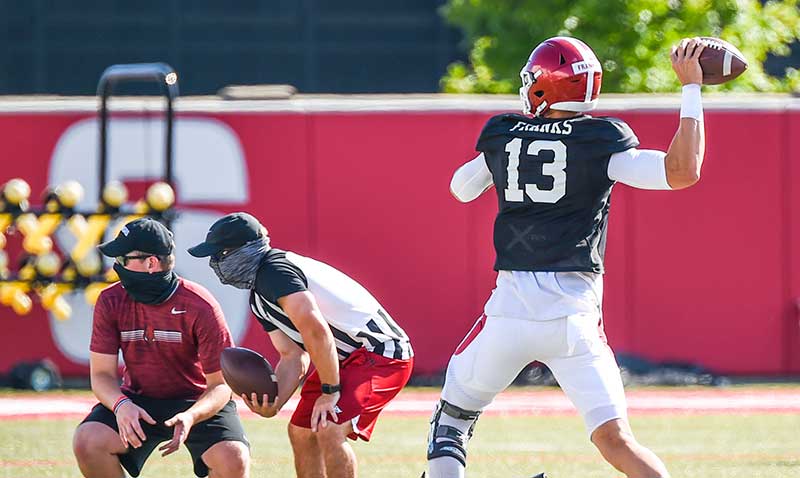 After Wednesday’s practice in shoulder pads, Briles was asked if the starting QB job is still the Florida graduate transfer’s job to lose going into Friday’s second preseason scrimmage.

Franks has the body and arm to presume he would start on talent alone, but not necessarily, Briles implied.

“I really appreciate his work ethic,” Briles said. “He's a guy who comes up here and studies the tape. He watches it by himself every day. He watches the installs before we ever have our meetings. I feel like he's really starting to develop into a leadership role. You can talk about all that stuff, but he could be 5-9, 180 and slow and look like me, but he's not. He's 6-6, 240 pounds, and he's got a lot of God-given abilities, and he does not take them for granted. I’m very glad that we got him.”

Left offensive guard and tight end have been described as up for grabs positions, but on the line redshirt freshman Beaux Limmer seems entrenching himself at right guard like returning senior left tackle Myron Cunningham and sophomore Ricky Stromberg, a starting guard last year now the starting center.

“He’s just been consistent,” Briles said of Limmer. “You know what you’re getting out of Beaux every day. He’s around 305. But when you see him move, he really plays fast. Beaux will strike you, and he’ll finish you. If you're a twitchy guy and you've got some lead in your butt and you can move some weight, you're playing right guard, which is what we want.”

Right offensive tackle features strong competition with veteran Dalton Wagner and Noah Gatlin, the third-year sophomore from Jonesboro, so promising to play four games as a 2018 redshirt freshman then sidelined all 2019 by a preseason knee injury that required major surgery.

“He (Gatlin) looks good,” Briles said. “He’s been on the field a bunch. He’s obviously an extremely big kid (6-7, 307) and looks really healthy right now on the field. He’s going to do everything right to make sure that he does stay healthy.”

Regarding what Arkansas head coach Sam Pittman and Briles seek from the offense in Friday’s scrimmage, Briles said: “You’ve got to protect the football and give yourself a chance to win every single game. So that’s going to be our No. 1 priority on offense. The discipline within each and every play, just doing your job. Trying to limit the missed assignments. That’s also going to be a big deal for us.”

For defensive coordinator Barry Odom, a big deal is the defensive line, with the first team manned by ends Julius Coates, the junior college transfer, and Dorian Gerald, a senior who missed 2019 with injury, senior Jonathan Marshall and graduate transfer Xavier Kelly pushed by third-year sophomore Isaiah Nichols at the tackles, pressuring Franks and Jefferson on Friday.

“Especially in this league, you’d better be able to put pressure up front, otherwise it’s going to be a long day,” Odom said. “I’m leaning on those guys. Coach (Derrick, the defensive line coach) LeBlanc has done a heck of a job getting them in the position, and we’ve just got to keep pushing for the next couple of weeks.”

The Razorbacks open their (10 game) entirely SEC schedule at 3 p.m. Sept. 26 against the nationally No. 4 Georgia at Reynolds Razorback Stadium on the SEC Network.

“Going into the game last year, we were on ultra alert for wherever number 16 (Burks) was lined up,” Odom said. “Now being around him and watching him compete, I’ve got even more respect for him. He is as talented as a guy I’ve gone against. He also works so hard, extremely hard every day. You’re going to get his best every single day.”