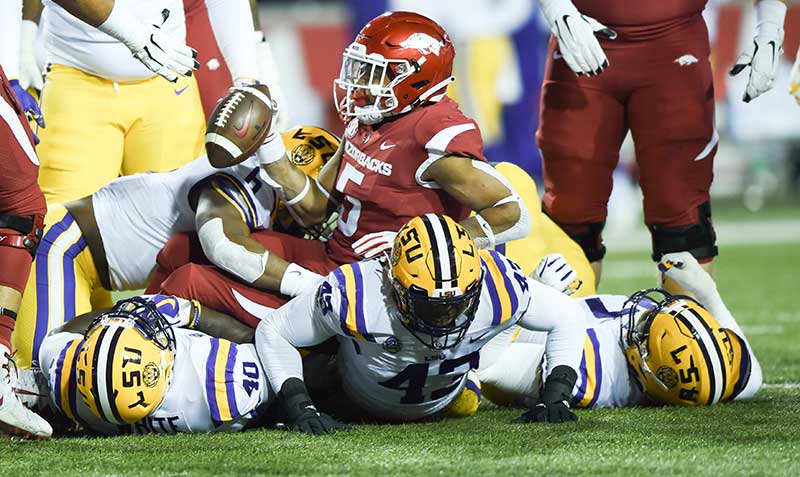 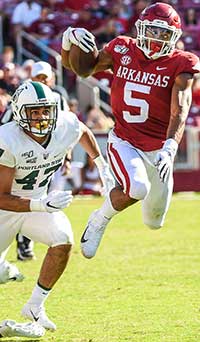 FAYETTEVILLE - In the sixth and seventh games of Arkansas’ 2018 season,  Rakeem Boyd’s mind and body caught up to major college football.

As a transfer finishing his associate’s degree at Independence (Kan.) Community College in August 2018, Boyd had to catch up in conditioning and the playbook.

In the next game, a gut-wrenching 37-33 loss to Ole Miss in Little Rock, Boyd netted 109 yards, including a 69-yard touchdown, on just seven carries. All came in the first half. An injured tailbone forced him uncomfortably to sit out the second half.

Boyd led the Razorbacks last fall with 734 yards rushing averaging 6.0 per carry, but he mostly was in an out of games with a chronic shoulder injury that surgery repaired last winter.

Boyd (6-0, 213) rehabbed the shoulder and missed spring drills but debuted fit Saturday. He netted a game-leading 114 yards on 18 carries with a TD in the 20-13 season-opening victory over visiting Portland State.

“Rakeem is stronger and more physical,” Arkansas coach Chad Morris said.  “I thought as the game went on, he got more comfortable in seeing it. Again, he’s a guy who did not go through spring ball, went through fall camp and I just think the more reps, the more opportunities he gets, as you saw, the better he’s going to get.”

Boyd needs to be the best Saturday in the SEC-opener at Oxford, Miss. against those same Ole Miss Rebels he bedeviled last year until the injured tailbone forced him out.

“I think had he not gone out (injured in Little Rock) he was on track to have a career night,” Morris said. “I know he said that was disappointing he didn’t get back in. He’ll be ready as all our guys will be.”

“Yes sir, I mean, really this game is for redemption,” Boyd said during the Portland State postgame regarding the 6:30 p.m. SEC West game at Ole Miss. “Last year, we were up on them and I got hurt. This year, we just have to finish. I got to stay healthy."

Off last season’s 0-8 SEC goose egg contributing to an overall 2-10 disaster, Boyd said the whole team craves to beat the Rebels whom they believe they should have beaten.

“I think we're ready,” Boyd said. “You know what I mean? Last year, we held them. I think this year we will come in with a bang. We just have to go in this week and fix some corrections. It will be on."

From his players scrimmaging against Boyd during the August preseason, Arkansas defensive coordinator John Chavis knew Arkansas’ best running back would be at his best to start the season.

“I think he's got really good speed,” Chavis said. “He’s got fluid hips. He can change direction. He can stick his foot in the ground and get vertical, and he runs physical, a lot more physical than you think.”

Gunter said speed, power and vision make Boyd one the SEC’s more complete running backs. ”I think he’s got the whole package,” Gunter said, “and the way he works on a lot of things people don’t see off the field.”

With what Morris weekly calls “a class on grass,” the Razorbacks wrapped game-week drills with a light, closed Thursday practice.

True freshman Mataio Soli has practiced first-team defensive end since Bell injured a knee while replacing Dorian Gerald. Gerald started against Portland State but is out for the season upon straining an artery in his neck.