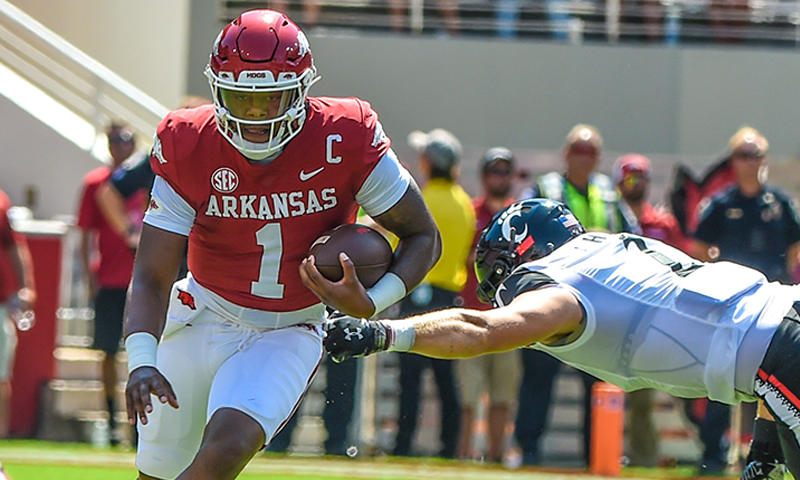 FAYETTEVILLE — The Arkansas Razorbacks' running game was strong in last week's season-opening win, and it was even better Saturday at Reynolds Razorback Stadium.

Sanders joins Razorbacks heroes Darren McFadden and Felix Jones as the only players to run for more than 150 yards and 2 TDs against the Gamecocks.

“Coach Pitt called out the O-line on Tuesday and told us that this game will be won in the trenches,” senior lineman Dalton Wagner said. “We took it very personally this week to make sure that we could run the ball, and with the run game today you couldn’t ask for a better game.”

Jefferson (Craven Whitlow photo) completed 18 of 21 passes for 162 yards, including a 23-yard touchdown pass to Warren Thompson (3 receptions, 36 yards) in the fourth quarter.

Thompson was one of the four Razorback receivers to have 3 or more receptions along with 30 or more yards receiving.

“Being able to have a guy like Matt with the speed and versatility he brings really helps,” Jefferson said. “It’s great to be able to put the ball in his hands and let him make a play.”

Much like last week’s game against the Cincinnati Bearcats, the Razorbacks never trailed Saturday, but Arkansas' defense yielded yards in the passing game.

Oklahoma transfer Spencer Rattler (24-39 passing, 376 yards, 1 TD, 1 interception) rallied the Gamecocks from a 21-3 second-quarter deficit to make it a 21-16 game when Rattler connected with Antwane Wells Jr. (8-189 receiving) on a 62-yard touchdown pass with 8:51 to play in the third quarter.

Arkansas responded with two touchdowns in the first three minutes of the fourth quarter — a 2-yard run by Jefferson and the Jefferson pass to Thompson — to retake command at 35-16 with 12:09 to play.

The defense — which has allowed 701 passing yards in 2 games — did force 3 Gamecocks turnovers with 2 fumble recoveries and an interception from LSU transfer Dwight McGlothern.

Georgia Tech transfer lineman Jordan Domineck again sealed the game for the Razorbacks with a fourth-quarter sack on Spencer Rattler resulting in a safety.

The Gamecocks moved the ball through the air, but they were not productive on the ground, rushing 29 times for 40 yards.

Alabama transfer Drew Sanders led the way for the Razorbacks defense with 11 total tackles and 2 sacks.

“I think he played a heck of a game,” Pittman said of Sanders. “He’s getting better each week because he’s understanding and turning it loose a little bit more. If you see today vs. when he first came in the spring, you’d think you had two totally different players.”

Bumper Pool, Sanders' running mate at inside linebacker, picked up 7 tackles, including a 15-yard sack, and returned an onside kick to the South Carolina 9 with 6:18 to play after South Carolina made it a 35-24 game.

Arkansas' defense was without two starters — free safety Jalen Catalon, who Pittman announced is out for the season with a severe shoulder injury, and nickel back Myles Slusher, who is expected back for next week's non conference matchup with Missouri State.

Pittman said he believes the secondary can and will improve.

"We covered well at times and then we covered poorly at times," he said. "We've got to become more consistent. I think we can do that, but with the first week, losing two of your top defenders and coming out with a win like that. ... I thought it was good. They played Arkansas football.