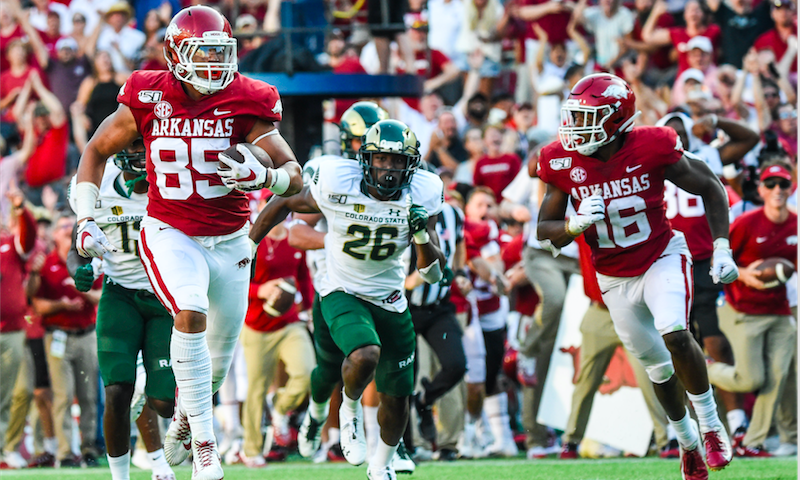 The 2019 Razorbacks had them all Saturday, and they produced big plays as Arkansas turned a third-quarter tie into a wild 55-34 victory at Reynolds Razorback Stadium.

Arkansas’ victory was sparked by a 21-0 fourth quarter. A year ago, CSU outscored Arkansas 17-0 in the fourth quarter at Fort Collins.

Starkel, in his first Arkansas start and first start period since a Texas A&M bowl game in 2017, passed the Razorbacks to 2-1 going into next Saturday’s non-conference game against San Jose State here. He completed 20 of 35 passes for 305 yards and three touchdowns with no interceptions.

“I thought Nick did a great job,” Arkansas coach Chad Morris said. “I really did. He  prepared very well. He missed some deep balls he wished he would have back. But he sees the field really well, and he communicated with us on the sidelines, I thought his comfort level grew as the game went on.”

O’Grady, with the Hogs up 41-34 late and the Rams trying to wrestle him out of bounds to stop the clock, broke away from four tacklers for the 62-yard TD at 5:32.

The senior tight end from Fayetteville was withheld the first quarter, Morris said, because he ailed from strep throat earlier in the week. By Arkansas’ first series of the second quarter, Morris apparently deemed him healed.

“C.J. O’Grady, that was a huge play for us,“ Morris said. “Determination, will, drive. That was a great finish.”

“Obviously, the big hit from Hayden Henry knocking the ball loose right there for Bishop’s scoop and score that put us up three touchdowns was a huge part of the game,” Morris said.

They got help from running backs Rakeem Boyd (20 carries for 122 yards and two TDs) and Devwah Whaley (nine carries for 81 yards and a TD).

Arkansas netted 520 balanced yards (305 passing and 215 rushing). All, whether they were in Arkansas last year or not, responded to Morris’ vow and their own vows not only off last year’s game in Fort Collins but last week’s 31-17 SEC loss at Ole Miss.

“I challenged our guys to respond,” Morris said. “And I started to see the response last Saturday night in the locker room (postgame in Oxford, Miss.)   We did not play perfect today. Our youth did some really good things and some things we’ve got to improve on. But response was it and we did that several times today.  We had to. Our backs were against the wall. We got outscored a bit midway through the game, and we responded and we finished.”

Despite the 21-point margin outcome, the Hogs needed all they could muster to surpass Coach Mike Bobo’s Rams.

The Rams (1-2 of the Mountain West) netted 180 yards on 20 carries from Kinsey and stayed tough in the third quarter with backup QB Patrick O’Brien (seven of 10 for 106 yards and a TD after veteran starter Collin Hill (13 of 23 for 99 yards and a TD) exited the game injured during CSU’s first series of the third quarter.

Arkansas started from behind. On the game’s second play from scrimmage, CSU tailback Marvin Kinsey burst unfettered up the middle, eluded safety Kamren Curl and burst for a 75-yard TD just 18 seconds into the game.

Starkel indeed responded. He threw a 38-yarder to Treylon Burks on his first play to the CSU 37. Starkel’s 6-yard pass to Mike Woods on third-and-3 netted the first down preceding the quarterback’s 24-yard tying TD pass to Knox.

Arkansas backup tight ends Chase Harrell and Grayson Gunter dropped passes after the Hogs defense forced a CSU punt, but Harrell caught his next one for a 14-yard TD at 7:54 of the first quarter, following Whaley’s 24-yard run on third-and-1 and Starkel’s 17-yard pass to Knox.

Arkansas’ 14-7 lead increased to 21-7 when Boyd traveled 59 yards for a TD following center Ty Clary’s block up the middle at 5:59 after the Rams were flagged for pass interference.

The Hogs seemed about to run away with the game, but remember, they led last year 27-9 in the third quarter at Fort Collins and lost.

Hill quarterbacked a five-play 75-yard drive fueled by Rams running backs Kinsey and Marcus McElroy running around the ends before Hill and 6-6 receiver Warren Jackson connected for a 6-yard TD at 3:27

Limpert, sensational on first-half kickoffs with five of six unable to be returned, kicked a 54-yard field goal at 1:02 capping a long first quarter with Arkansas up, 24-14.

“Conner Limpert gave us a huge momentum boost,” Morris said. “That kick (the 54-yard field goal) probably could have gone for 65. When it came off his foot it was a rocket. He responded after missing one last week.”

Limpert’s 22-yard field goal on fourth-and-2 from the Rams’ 4-yard line accounted for Arkansas’ only second-quarter points. The Rams scored 10 in the second quarter. Hill’s 1-yard plunge scored  TD at 7:31.

Cayden Camper, the freshman third-string kicker called out of class when CSU coach Mike Bobo had enough of his top two kickers’ in the first two games, kicked a 46-yard field goal with four seconds left of Arkansas’ 27-24 first half and had the distance but was wide left on a 50-yard field goal attempt in the fourth quarter.

Arkansas’ defense was “challenged at halftime,” Morris said after noting the Rams averaged 10.3 per carry in the first half, responded with the fourth-quarter shutout.

“After what happened a year ago, our guys weren’t going to let this happen again. They weren’t.” Morris said, citing defensive seniors T.J. Smith, Sosa Agim and Scoota Harris. “They weren’t. T.J. Smith, Sosa, Scoota, those guys in that defensive huddle were calm but they were certain that we we were going to win this thing in the fourth quarter.”