HOGS fired up for Southwest Classic 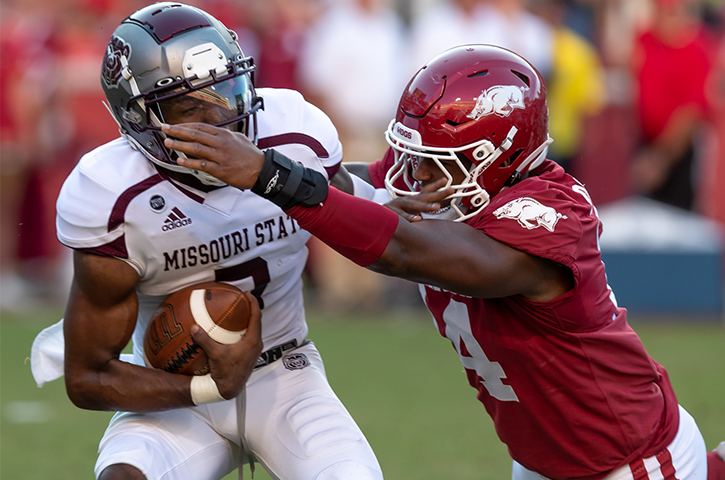 FAYETTEVILLE — Neutral site games have been a mainstay in college football, especially when it comes to rivalry games. Whether it is Oklahoma vs. Texas at the Cotton Bowl, Florida vs. Georgia in Jacksonville, Fla., or Arkansas vs. Texas A&M at AT&T Stadium in the Southwest Classic.

The Hogs are looking for a repeat of last year, when they beat the Aggies 20-10 for their victory in the series since 2011.

Many of team’s veteran players — like junior offensive lineman Luke Jones (6-5, 327; Pulaski Academy) — say they understand the importance of the yearly battle against the Aggies.

Jones, who has been with the Hogs since transferring from Notre Dame in 2019, has experienced the highs and lows in the rivalry game.

This year’s game is of special importance to Jones, who will play as a starter for the first time against the Aggies.

“This game always has a great environment,”  Jones said.  “Last year was my first experience playing in that stadium, so I’m excited for the game this weekend.”

Wide receiver Matt Landers, a transfer from Toledo, will be experiencing the Southwest Classic for the first time this Saturday. Landers (14 catches, 211 yards this season) said he is looking forward to it.

“It will be my first time inside that stadium, so I’ll be able to tell you all more about it after the game,” Landers said. “But I’m definitely looking forward to the game.”

Missed tackles have been a problem for the Razorbacks defense, especially last Saturday when they yielded 409 yards and 27 points to FCS foe Missouri State.

Razorbacks players and coaches have said this week that they can’t afford missed tackles against players like A&M running back Devon Archane (46 carries, 196 yards, 1 TD).

“Coach [Barry] Odom has done a great job this week emphasizing that we have to swarm the ball and be able to make tackles,” linebacker Chris Paul Jr. said. “We’ve done more tackling work in individual drills because we can’t have that happen against a guy like him [Archane].. You can’t miss tackles vs. that guy because he’ll take it to the house.”

ADDING UP THE SACKS

The Razorbacks’ pass defense ranks last in the SEC, yielding 353 yards per game, but the Hogs have been pressuring opposing quarterbacks with 17 sacks, a total that not only leads the SEC but the entire FBS. Linebacker Drew Sanders (5.5 sacks) and defensive linemen Jordan Domineck (4 sacks; Tommy Land photo) and Zach Williams (2.5 sacks) are 1-2-3 in the SEC in sacks.

“Iron sharpens iron,” Williams said. “You’re not going to roll over and let somebody take your spot. So, with the new guys that came in they really helped push me to get better.”

Junior K.J. Jefferson has changed the perception of him being primarily a running quarterback during the Hogs’ 3-0 start. Jefferson is ranked fifth in the SEC with 770 passing yards while completing more than 70 percent of his passes. Jefferson put up his best passing performance last Saturday against Missouri State, completing 19 of 31 for a career-high 385 yards and 2 touchdowns.

“He’s one of the best quarterbacks I’ve played with since I started playing football,” Landers said. “He has great arm strength and a great ability to read opposing defenses because of his high IQ.”

Jefferson will have his work cut out for him against an Aggies defense that is ranked second in the SEC in pass defense, allowing only 147.3 passing yards per game this year.