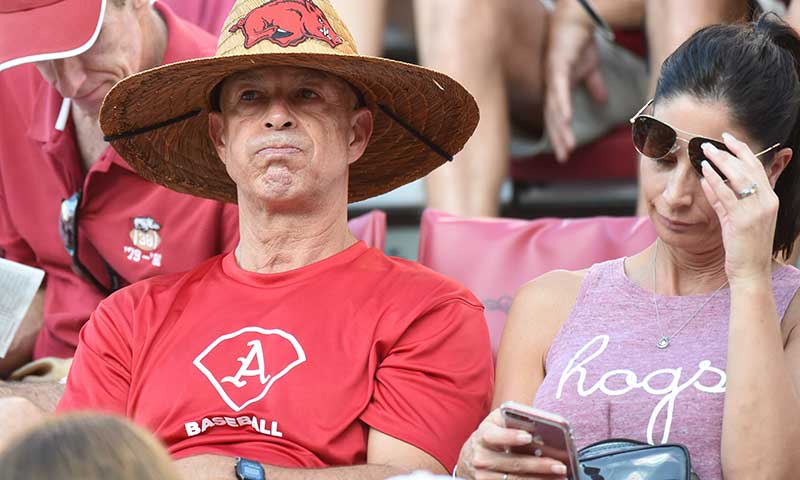 FAYETTEVILLE - Arkansas’ furious second half caught up to upstart San Jose’s quick start Saturday night, but the surprising Spartans’, as 21-point underdogs, then went 75 yards to score in five plays.

The last one, DeJon Packer’s untouched 19-yard TD run, broke a 24-24 tie with 1:43 left for a 31-24 San Jose State victory sealed by the Spartans intercepting Arkansas quarterback Nick Starkel for the fifth time before a startled 56,058 announced fans attending at Reynolds Razorback Stadium.

“I was a little concerned in pregame warmups to be honest with you,” Arkansas head coach Morris said. “I thought we were a little too loose. I thought it was a little too giddy. And I made comment of that we’re not good enough to come out and just walk out on the field with a Razorback logo on your helmet and expect you’re going to win.”

SJS defensive back Bobby Brown’s second pick of the game clinched a stunning upset rivaled in Arkansas history by last year’s 44-17 loss to North Texas here and a 10-3 season-opening  loss in 1992 to The Citadel of then lower division 1-AA.

“Totally unacceptable,” Morris said postgame. “You get what you deserve in life, and we didn’t deserve to win this football game. Any time you have five turnovers … We had great fight to come back, and they go down the field on you like nothing. Missed tackles. Completely unacceptable. We had the opportunity to capture momentum at home and on a couple of occasions, and we can’t convert on fourth and short. And defensively we didn’t get pressure on the quarterback (SJS quarterback Josh Love). He could have sat back there and ate a sandwich. But give credit to those guys. They out-played us and they out-coached us.”

“What a night,” Brennan said. “What a night for these players, these coaches and for our fans. Obviously when you look at the schedule, it is one of those games that everybody talks about. Sometimes it is hard to get your team to focus on anything else because you are going on the road to play an SEC opponent like Arkansas with the history of this program, how special this place is, the stadium, the crowd and all that stuff. To see them rise to the occasion, stay together and keep believing. Arkansas makes a run late and we didn’t fold. We actually bowed up.”

Arkansas, which used a 21-0 fourth quarter to beat Colorado State, 55-34 the previous Saturday, rallied from down 24-7 at half with Connor Limpert’s 48-yard field goal in the third quarter and Starkel TD passes of 30 and 8 yards by Starkel to Tyson Morris and Trey Knox to tie 24-24 with 2:56 left a game it would never lead.

Starkel finished 28 of 50 for 356 yards and three touchdowns, one each to receivers Mike Woods, (four catches 115 yards)  Tyson Morris (four catches for 60 yards) and Trey Knox (eight catches for 83 yards) vs. those five interceptions

Arkansas’ defense, helpless at the outset against Josh Love, 32 of 49 for 402 yards for the game after an 18 for 26 and 240 yards and two touchdowns first half) but finally getting a handle on the Spartans in the second half, lost grasp of the Spartans from 2:56 through Packer’s romp. Starting from his 25, Love handed off to running back/spare QB Nick Nash for a 7 yard gain then completed 12 and 18 yard passes to Tre Walker and a 24-yard pass to JaQuan Blackwell before Packer packed the game in San Jose State’s win column.

The non-conference loss to the Mountain West member Spartans drops second-year coach  Morris’ Razorbacks to 2-2 heading into next Saturday’s SEC game with Texas A&M at the Dallas Cowboys’ AT&T Stadium.

Brennan’s Spartans, previously 4-23 during his tenure in San Jose, Calif., were  coming off an open date which they obviously used in confounding the Razorbacks, are 2-1 having beaten Northern Colorado but lost convincingly to Tulsa.

“We knew No. 10 was a great receiver, but they did whatever they wanted to do throwing the football,” Morris said.

“I thought he forced the ball and pressed,” Morris said. “You’ve got to play within the system and take what they give us. You can’t force everything. But it wasn’t just that. We’ve got to keep him clean  (protected) and we have to be effective running the football. We had to throw the ball 50 times tonight. That’s entirely too many.”

Led by Rakeem Boyd’s 18 carries for 91 yards, Arkansas ended averaging 4.1 per carry but in the first half netted just 64 yards on 16 carries as San Jose State controlled the first half tempo, clock and scoreboard.

The Spartans stunned Arkansas from the get-go.

First play from scrimmage after Arkansas’ Connor Limpert kickoff through the end zone, Love and Bailey Gaither connected for a wide open 50-yard pass that would have been a touchdown except Gaither stumbled at at the Arkansas 25.

“They got us back on our heels from that first play,” Morris said. Turned out Gaither’s stumble just delayed the inevitable. Love’s 3-yard touchdown pass to JaQuan Blackwell completed a 7 play 75-yard drive for a 7-0 lead at 12:44.

After an exchange of punts Arkansas mounted a drive that ended in the first of two failures going for it on fourth down. The Spartans stuffed the Arkansas O-line and running back Devwah Whaley for a 2-yard loss on fourth and three from the San Jose State four.

From their six, the Spartans drove again to the Arkansas 28 but couldn’t score.  Matt Mercurio, kicking three first-half PAT’s and a third-quarter 47-yard field goal, missed wide from 46.

Starkel and Trey Knox connected for 17 yards, and running back Rakeem Boyd netted a 13-yard run before Starkel hit wide open Mike Woods for a 62-yard TC at 1:07 of the first quarter.

The Spartans owned their 17-0 second quarter.

Starkel looked for tight end Cheyenne O’Grady over the middle. The pass instead found SJS linebacker Ethan Aguayo. Aguayo returned it 32 yards to the Arkansas. Enter SJS backup quarterback/running back Nick Nash. In the next three plays Nash ran twice. One for 13 yards and the other for the 15-yard go-ahead touchdown.

Arkansas drove from its 21 to the SJS second and two at the Spartans 24. An incomplete pass and Rakeem Boyd’s 1-yard gain preceded Starkel stopped short on a fourth and one quarterback sneak.

The Spartans drove for Mercurio’s career long 47-yard field goal and a 17-7 lead with 6:09 left in the half.

Spartans spare running back Isaiah Holiness, stunning Arkansas earlier taking a Love pass in the flat for 32 yards, tallied the Spartans’ final first half touchdown capping a 9-play drive at 1:06.

Twice more in the third quarter the Spartans picked off Starkel passes, one after the Razorbacks drove to the Spartans’ eight.

But thanks to Limpert’s 48-yard field at 5:01, Arkansas scored the third-quarter’s only points cutting it to 24-10.

Finally converting on a fourth down, with Whaley’s 16-yard counter on fourth and two propelled Arkansas’ fourth quarter as did a big sack defensively by defensive end Jamario Bell when the Spartans were desperately losing their lead.

“I loved our fight  really thought, as bad as we played we’re fixing to win this football game.,” Morris  said of Arkansas’ comeback. “And then we couldn’t finish it.

So with five easy pieces on their winning drive’s only plays San Jose State made the Mountain West proud while  humbled the SEC’s Hogs at home.

“For three quarters they were the SEC football team,” Morris said. “They took it to us.”

Morris said he anticipates they will play against Texas A&M.