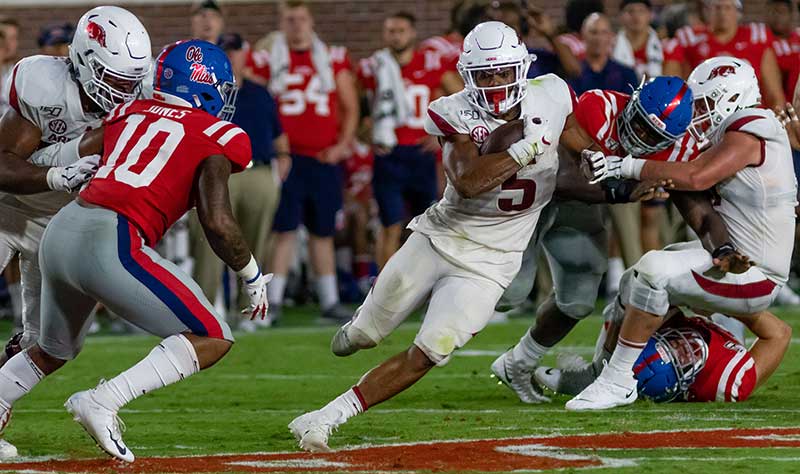 Warren and Hayden are in concussion protocol from injuries suffered Saturday during Arkansas’ 31-24 loss to 21-point underdog San Jose State.

Freshman receiver Trey Knox, missing some practices but so far always playing since suffering an early-season hip injury, did not practice Wednesday but should play Saturday, Morris said.

“I know what he can do at running back,” Morris said. “I can always move him back there, but we’re trying to get him to help us at receiver.”

While not discussed if he’ll be available Saturday, receiver Jordan Jones of Smackover practiced Wednesday. Jones has been sidelined since the Aug. 31 season-opener with a high ankle sprain that required surgery.

Arkansas starting QB Nick Starkel is a graduate transfer from A&M who played as 2017 redshirt freshman starter and played four games last season for then first-year A&M coach Fisher as a reserve to quarterback Kellen Mond.  Starkel used last year’s new rule to play a maximum four games and still be a grad transfer through the NCAA portal to leaving the team and transfer to Arkansas while maintain his 2018 junior football eligibility for 2019.

Also top Arkansas running back Rakeem Boyd was a redshirt freshman Aggie in 2016 then transferred to Independence (Kan.) Community College in 2017, then to Arkansas in 2018.

Morris is a Texas A&M grad.

Asked about Starkel and Boyd being particularly hyped for the game, Morris said resolve ought to be team-wide given the Hogs’ embarrassment vs. San Jose State.

“I think the entire football team will be excited to get back out to get the performance we put on the field last week out of our system,” Morris said. “So I anticipate our best football. I think our guys are going to play incredibly. And I think with Nick and Rakeem, both of those guys have teammates on the other team and the history of knowing each other. So there will be an extra incentive I’m sure. It’s only human, but I wouldn’t expect that to take away from their playing.”

Morris said Starkel “pressed and tried to do too much,” throwing four interceptions Saturday even while bringing Arkansas back from a 24-7 deficit to tie it 24-24 and throwing his fifth pick after San Jose State broke the tie with a touchdown with 1:13.

Morris, not having his quarterback media available this week, has tried to minimize Starkel’s old A&M associations this game-week.

“Well, you know you can only do that so much,” Morris said. “He spent some time there and graduated there and has an understanding of his (former) teammates. He invested his time there. Watching Nick and how he’s prepared  his week and just his maturity level, I would think of Nick just being focused and locked in on his preparation and his ability to move this offense and elevate his teammates.”

Fisher spoke highly of Starkel and their mutual cooperation regarding his transferring with the decision made to start Mond.

“He’s an extremely classy guy and a very, very good player,” Fisher said. “Nick is definitely a starter. He could have started here. It was a tough battle and only one can play, and he elected to (transfer).”