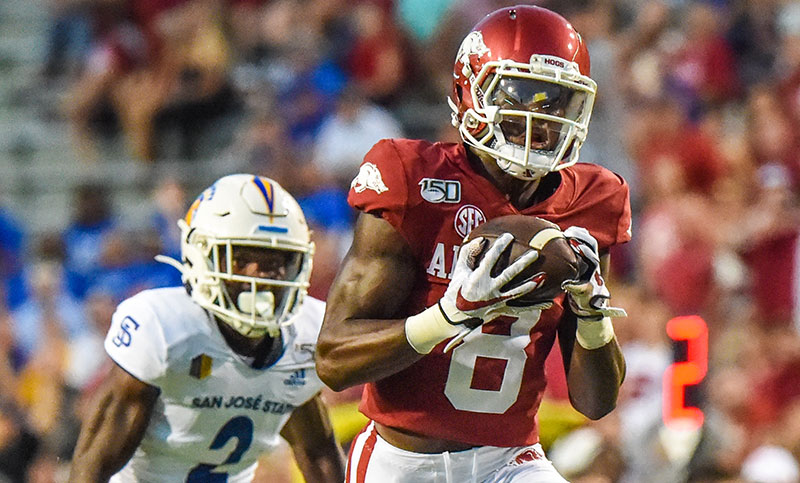 FAYETTEVILLE - These Razorbacks have played for head coaches who just came to Arkansas.

In Saturday’s 3 p.m. home opener against Georgia, they play for a coach who came back to Arkansas.

It makes a difference, these Razorbacks say.

As a boyhood Razorback fan while growing up in Oklahoma, Sam Pittman coached the Razorbacks offensive line for Bret Bielema from 2013-2015.

Though he and Bielema parted frostily, no Arkansas coach since former Razorback Houston Nutt (succeeded Danny Ford in 1997)  lobbied harder than Pittman to return to Fayetteville.

Especially so if you are Arkansas grown like Greenwood’s Grant Morgan, a  fifth-year senior linebacker and defensive captain.

“The only thing you can ask is to have someone you want to go out and play hard for,” Morgan said. “And the way you’re going to be able to do that is if you know they love being a Razorback as much as you. Knowing we have a coach who loves putting on his hard hat in Fayetteville, Arkansas, it makes you fight for him even more.”

Pittman’s hypothetical hard hat can’t block or tackle during a game, but it helps. These Hogs need all the help they can get. Dating back to Bielema’s 2017 finale, the Hogs wallow 1-23 in the SEC and have lost the last 19 straight league games.

Georgia likely will make it 20. The SEC East champions three-years running and 12-2 last year, Georgia returns 17 key players from a defense that led the nation in 2019 by yielding the fewest points (12.6) per game.

The Bulldogs placed nine on the SEC Media’s three All-SEC Preseason teams announced Wednesday, including defensive linemen Jordan Davis and Malik Herring and safety Richard LeCounte on the first defense and linebacker Monty Rice and cornerback Eric Stokes with center Trey Hill, “as good a center as there is in the country,” said Pittman who coached him, and receiver George Pickens on the preseason All-SEC second offense.

Additionally, Georgia linebackers Nakobe Dean, second-team, and Nolan Smith, third-team, were recognized with the other Dawgs on the Coaches All-SEC Preseason teams.

In contrast, senior running back Rakeem Boyd, All-SEC second-team by both groups, was the lone Razorback named to the preseason teams.

Though achieving off-season plans to get his Razorbacks bigger, Pittman said the contrasting size will be apparent to Saturday’s naked eye.

“They’re big,” Pittman said, first citing Georgia’s dominating defense. “They’re physical. They’re well-coached. They run to the football, and they’re very physical when they get to the football.”

The Georgia line and linebackers stifle the run. They effectively rush the passer, their rush enhanced by the passer usually finding his receivers smothered by LeCounte, Stokes and friends in the secondary.

If it means running Boyd against a wall or looking for Burks amid a pack of Dawgs, so be it, Pittman said. “We need to feature him (Boyd) as much as we can,” he said.

“It’s like Rakeem,” Pittman said. “If you don’t get him the football, he’s a good player you’re wasting. We’ve got to design ways if they take him (Burks) away or double cover him - that’s our job. That’s what we get paid for and that’s certainly our intention.”

Offensively, the Bulldogs graduated all but Hill as returning starters in their line, graduated their top two 2019 running backs and saw 2019 junior quarterback Jake Fromm turn pro last winter. This summer, grad transfer Jamie Newman of Wake Forest took the COVID-19 opt-out to concentrate on readying for the 2021 draft.

The Dawgs still “have plenty to choose from,” on the offensive line said Pittman who recruited them. They sport an excellent receiver in Pickens with White so well thought of he’s already All-SEC Preseason third-team.