HOGS: Sanders shows what he can do 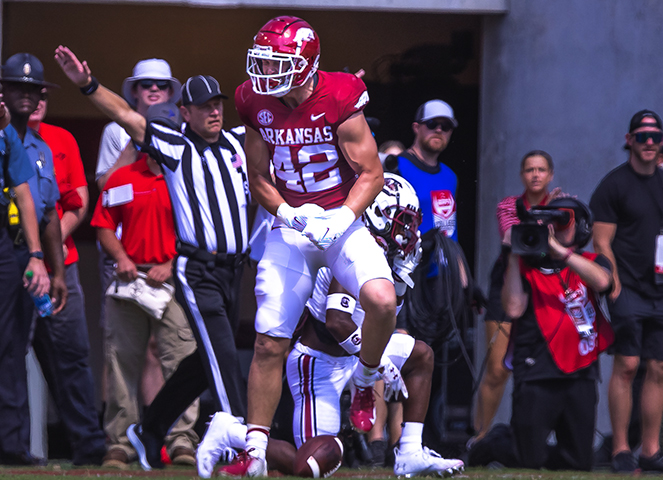 FAYETTEVILLE — The transfer portal for college football has allowed some athletes to revitalize their careers, and Arkansas linebacker Drew Sanders is a prime example.

Sanders (6-5, 233;Tommy Land photo), once a five-star Alabama recruit out of Ryan High School in Denton, Texas, will get a chance to show the Crimson Tide what they're missing on Saturday when No. 20 Arkansas plays host to the second-ranked Crimson Tide in a 2;30 p.m. kickoff at Reynolds Razorback Stadium.

Sanders originally committed to Oklahoma in 2017 before signing with Alabama and playing two seasons with the Crimson Tide.

“Drew [Sanders] was a good player when he was here,” Alabama Coach Nick Saban said earlier this month. “Played extremely well for us last season but had an unfortunate injury that held him back. He would have likely been a starter here this year.”

Sanders earned playing time through special teams as well as getting opportunities on defense during blowout wins as a freshman in 2020, accounting for 9 tackles.

Sanders worked his way into a starting role last season after Alabama's starting outside linebacker — future NFL player Christopher Allen — went down with a season-ending foot injury in the season-opener against Miami.

Sanders lost his job after suffering a hand injury, which led to Dallas Turner taking over as the starter for the Tide while Sanders recovered.

With Turner earning that spot through his play and eventual 2021 Bronko Nagurski winner Will Anderson manning the other outside linebacker position, Sanders decided to enter the transfer portal, eventually signing with Arkansas.

Sanders has made an immediate impact for the Razorbacks, accounting for 31 tackles, 5.5 sacks, 2 forced fumbles and 2 pass deflections after 4 games.

His 5.5 sacks leads the SEC, and his play for the Razorbacks has not been lost on Anderson, who was not only a part of the same Alabama recruiting class as Sanders, but was also his roommate.

“I’m very happy for Drew," Anderson said. “He’s been playing extremely well this season. Drew is the type of guy where when both of us came in here [Alabama], he worked extremely hard.”

Sanders will get another chance to showcase his talent on Saturday in a game that will be televised nationally on CBS.

Sanders is not the only Razorback facing a former team or teammate on Saturday.

Defensive lineman Jordan Domineck will go against a former teammate from his time at Georgia Tech — Alabama running back Jahmyr Gibbs.

Domineck and Gibbs were teammates at Georgia Tech in 2020 and 2021, enduring back-to-back three-win seasons for the Yellowjackets.

Domineck said he and Gibbs weren’t close friends, but the two would have casual conversations from time to time along with having intense matchups during practice.

“God has a plan and that plan was put out there for the both of us,” Domineck said. “We were just trying to make the best of our situations, and I’m blessed we were both able to go somewhere and truly make an impact.”

Gibbs, who is the starting running back for the Crimson Tide, has 172 rushing yards and 17 catches for 187 yards with 3 receiving TDs.

Razorback nickel back Myles Slusher had quite the return last Saturday against the Aggies after getting injured in the season opener against Cincinnati.

Slusher was credited with 6 total tackles along with a pass deflection and a quarterback hurry.

“It felt good to be back,” Slusher said. “I still have a lot of stuff to clean up as far as my play and my technique. But I feel we’re coming together on defense and will have a strong week this week.”

Slusher's return was much needed, as the Razorbacks have already lost safety Jalen Catalon (shoulder) and cornerback LaDarrius Bishop (knee) for the rest of the season.

The depleted Razorback secondary will have their work cut out for them against an Alabama offense, led by 2021 Heisman Trophy winner Bryce Young, that averages 282.5 passing yards a game.