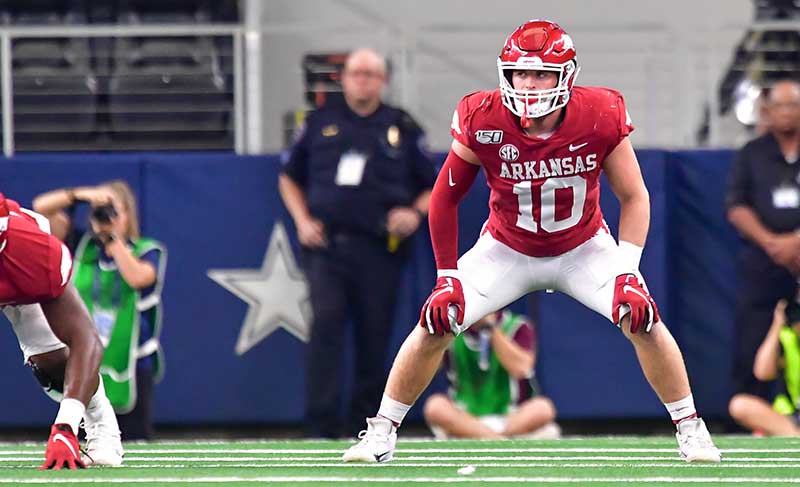 FAYETTEVILLE - For stellar performances in Arkansas’ 21-14 upset Saturday of Mississippi State, junior linebacker Bumper Pool and junior safety Joe Foucha were named SEC Co-Defensive Players of the Week Monday by the SEC Office in Birmingham, Ala.

Pool (in photo above) racked up a career-high 20 tackles. His 15.5 tackles average per game for the 1-1 Razorbacks leads the nation. Pool of Lucas, Texas, also broke up two passes to become the first Razorback in the same game logging 20 or more tackles with two pass breakups.

Foucha intercepted two passes, one in the second quarter and one in the fourth not only thwarting a Mississippi State drive at the Arkansas 21 but returning it 26 yards. Foucha also contributed tackles, with one shared for a loss.

The two contributed immensely to Arkansas snapping a 20-game SEC losing streak started in 2017 and passed through two head coaches.

“Yeah, I think it’s a great honor, and I’m happy for them,” UA first-year head coach Sam Pittman said Monday. “They had good games and were helped by their teammates to receive those honors. We’re very, very proud of them and happy for them.”

DISARMED - DANGEROUS
Senior middle linebacker Grant Morgan of Greenwood shrugged off a first-half elbow injury to make 15 tackles, one shared for a loss, and a pass breakup.

Pittman predicted Monday morning that Boyd and Burks would participate in Monday’s closed practice and that Brown might.

“He may or may not be at practice today, but we feel like he'll be available on Saturday,” Pittman said.

HANDLING SUCCESS
Going into Auburn, the Razorbacks face a problem last experienced Oct. 29, 2017, the day after they beat Ole Miss. How do you handle SEC success?

“I really don’t think it’s going to be a problem,” Pittman said. “You know we always have a good, bad and ugly video that I talk about to the team. I’m going to show them why we had success, what we have to work on to get better, and some things that are unacceptable. We’ll get them all fixed.”

HOGS VS. CHAD
Auburn, ranked No. 7 until losing Saturday 27-6 to Georgia, has Chad Morris, Arkansas’ head coach in 2018 and 2019, as its offensive coordinator.

He won’t make it such.

TV TIMES
Kickoff time for Oct. 17 game vs. Ole Miss will be 2:30 p.m. at Reynolds Razorback Stadium in Fayetteville on ESPN2. Following its Oct. 24 open date, Arkansas will clash at 6:30 p.m. Oct 31 on the SEC Network vs. Texas A&M at Kyle Field in College Station, Texas. On Nov. 7 in Fayetteville, the Razorbacks play host to Tennessee at 6:30 p.m. on ESPN or the SEC Network.