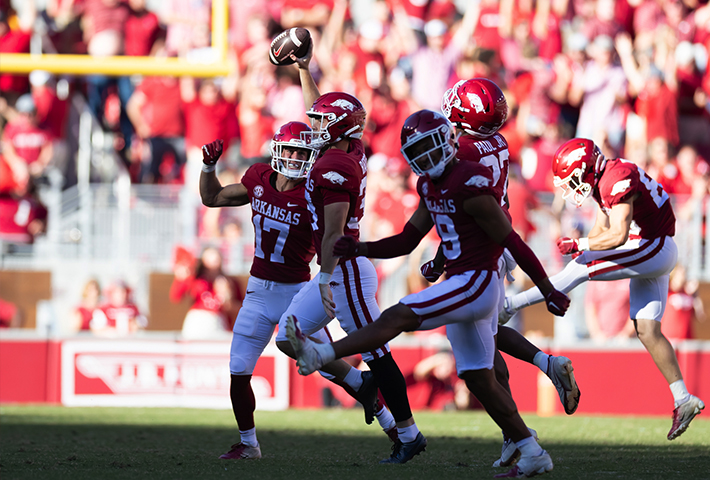 FAYETTEVILLE — Arkansas-BYU had the look of a marquee nonconference matchup — one featuring two ranked teams — as recently as two weeks ago.

Arkansas made it to No.10 after beating Cincinnati and South Carolina, but losses to Texas A&M, Alabama and Mississippi State in consecutive weeks dropped the Razorbacks (3-3 , 0-3 SEC) out of the AP Top 25.

BYU Coach Kalani Sitake (52-31 record, 7 seasons) said what has happened the past couple weeks has little bearing on what’s going to take place when the teams kick off at 2:30 p.m. at Lavell Edwards Stadium in Provo, Utah.

“Arkansas is really good,” Sitake said. “They have had some injuries and are looking to get healthy again and play this game. We are excited to invite them out to Provo and play this game in front of our home crowd.”

Saturday will be BYU’s first opportunity to play host to an SEC team since it defeated Mississippi State 28-21 in double overtime in 2016.

The Cougars ended up winning 6 of their final 7 games that year to finish 9-4.

“I feel like right now, we're more motivated than ever,” BYU defensive back Micah Harper said. “I think this week if we could bounce back with a win against Arkansas, it would change the whole momentum of our season.”

Arkansas quarterback KJ Jefferson has been cleared to play against the Cougars this Saturday after sitting out last week’s 40-17 loss to Mississippi State.

“He’s a great quarterback,” BYU’s Sitake said of Jefferson. “We’re going to have to do a great job of scheming for him this week.”

Jefferson returns to lead an offense that averages 462.7 yards of total offense this season.

BYU quarterback Jaren Hall (1,558 passing yards, 14 TDs, 2 interceptions) has not missed any game time after falling awkwardly on his throwing shoulder during BYU’s 38-26 victory over Utah State on Sept. 29.

But Hall passed for a season-low 120 yard in the loss to Notre Dame, and it has been reported this week that Hall did not practice in the days leading up to the Notre Dame.

Hall has returned to practice this week, BYU coaches have said.

“He has no choice. He has to go,” Sitake said of Hall’s status. “This is midseason football, so he needs to be ready to go.”

The Razorbacks are looking to end a three-game losing streak for the second time in two seasons.

Pittman said the feeling after last Saturday’s loss to Mississippi State is like the mood after a 38-23 loss last year against the Auburn Tigers.

“We sat very similar a year ago ... feeling lower than low after losing to Auburn,” Pittman said. “We thought going into that game we had a great opportunity to win the game, but we started slow, they started fast, and we couldn’t catch up.”

“You always worry about your team when they lose, when we lose,” Pittman said. “I don’t think we have a confidence problem and certainly we’re not overconfident, but you do worry about it being psychological in do you believe in each other. We’re trying to figure out the why and we know the why, so we just have to practice better. We’re in this thing together and we’ll get out of it together.”

Stephens scored on a 54-yard pass from Malik Hornbsy to pull Arkansas within 27-17 late in the third quarter.

“It was a good moment, but it was something I had been working on,” Stephens said of his touchdown catch. “I have been working all year to be ready for a moment like that.”

Stephens (6-0, 176; Oklahoma City, Okla.) has been primarily used as the team’s punt returner before last Saturday. Stephens has returned 10 punts for 127 yards, ranking him second in the SEC.  The highlight was an 82-yard TD return in the fourth quarter of a 38-27 comeback win against Missouri State.

“I think where Bryce’s [Stephens] confidence is coming from is from punt returns,” Arkansas Coach Sam Pittman said. “If there was any type of — ‘I don’t know about him’ — that has certainly been erased with his consistency to catch the football.”

Last Saturday’s performance might be indicative of what’s to come.

“He’s certainly moved up in our mind of guys that we would put in earlier in the game,” Pittman said. “Of course, I felt like he earned that on Saturday.”