HOGS vs. No. 11 Auburn preview 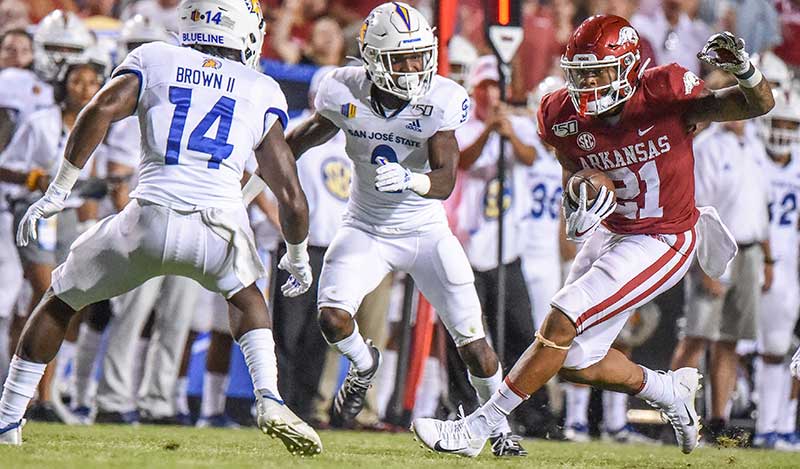 FAYETTEVILLE -  While honoring their greatest running back of the past, it seems the Arkansas Razorbacks will run into trouble Saturday against Auburn.

Simultaneously, the University of Arkansas and the National Football Foundation will co-honor Darren McFadden, the 2005-2007 Razorbacks great with two Doak Walker Awards as college football’s best running back and two Heisman Trophy runner-ups.

Unfortunately for Morris, he doesn’t have McFadden running for him as former Arkansas coach Houston Nutt did. The closest Arkansas McFadden facsimile, junior running back Rakeem Boyd, has been limited in practice this week since injuring a shoulder while rushing 15 times for 134 yards and two TDs in last week’s 24-20 SEC loss at Kentucky.

Perhaps even bigger for Arkansas, its defense again must try to run down a running QB.

Last week, with injuries sidelining Kentucky’s conventional QBs, the Wildcats’ most talented offensive player, wide receiver Lynn Bowden, moved to the QB position he played in high school. Bowden proceeded to run 24 times for 196 yards and two TDs on the Hogs. For good measure, Bowden completed seven of 11 passes for 78 yards and a TD without an interception.

Malzahn, a former state championship high school coach at three Arkansas schools and in college an Arkansas, Tulsa, and Auburn offensive coordinator before head coaching Arkansas State and Auburn, is known for his Auburn teams running the football when he has a running quarterback.

Jarrett Stidham, last year’s Auburn QB, passed well enough to be NFL drafted, but it was special teams, not a rushing offense, that ran up Auburn’s 34-3 victory last year over Arkansas. Auburn only rushed for 91 yards on 36 carries.

“They got after us,” Malzahn said. “Stuffed our run. Did a very good job of eliminating the big play. They kept things in front of them.”

Malzahn's run-first offense averages 230 rushing yards per game this fall, which ranks 20th nationally and third in the SEC.

Keeping in front of freshman running quarterback Bo Nix, 262 yards on 45 carries before sacks, will be more difficult than staying in front of Stidham. Nix can throw it, too, completing 83 of 152 passes for 1,125 yards and eight TDs with five interceptions.

The Auburn rookie did get his comeuppance in the Tigers’ last game, a 24-13 loss Oct. 5 to Florida. Florida’s defense was “disruptive,” Morris said upon viewing the Auburn vs. Florida film, but the Tigers had an open date week to improve their freshman’s fundamentals and restore his confidence.

Keeping Brown and his defensive cohorts contained will be crucial for Arkansas, regardless whether Morris quarterbacks SMU graduate transfer Ben Hicks or Texas A&M graduate transfer Nick Starkel or both against Auburn.

Netting a running game, with senior running back Devwah Whaley (in Craven Whitlow photo above) likely given a heavier load because of Boyd’s shoulder, is vital for the Hogs to do some ball-hogging after having the ball last week just 22:49 to Kentucky’s 37:11.