HOGS use bye week to heal 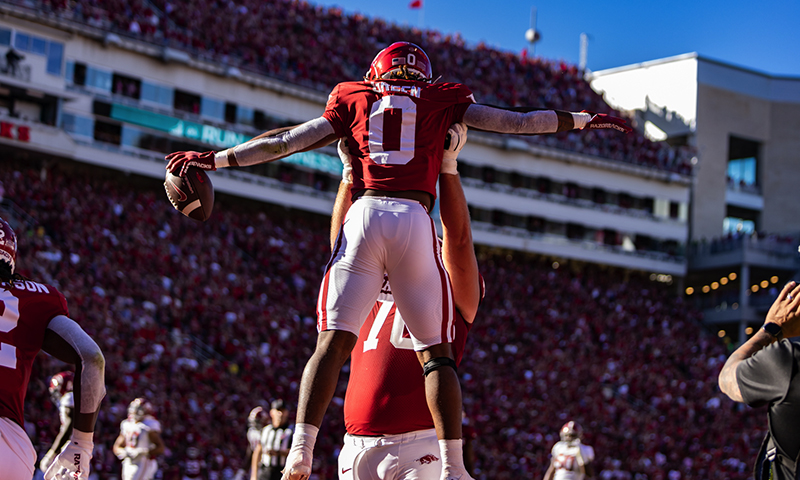 FAYETTEVILLE — The Arkansas Razorbacks completed a topsy-turvy first half of the season on a positive note last Saturday with a 52-35 win over BYU in Provo, Utah.

The Razorbacks, who won their first three games then lost three in a row before BYU, aim to get as close to full strength as possible during this bye week, which has included an off day on Monday and three light workouts on Tuesday-Thursday.

“We want to get the healthiest team possible,” Pittman said.

Pittman said he expects all the injured Hogs — with the exception of LaDarrius Biship and Jalen Catalon who are out for the season, and defensive lineman Taurean Carter —  to be ready for Auburn (3-4, 1-3) on Oct. 29.

Pittman said the Hogs have scaled back from their normal fast-paced, physical workouts.

“In walk through, we go through five segments and it’s all situational, things of that nature,” Pittman said. “It’s just a slowdown pace.”

Players like wide receiver Jadon Haselwood (shoulder) and linebacker Bumper Pool (hip) are using the less physical practice to heal nagging injuries they’ve dealt with throughout the season while players like defensive back Malik Chavis (head) and quarterback KJ Jefferson (shoulder) will look to recover from injuries sustained in the game against BYU.

The Razorbacks return to regular practices Monday as Pittman looks for the team to get focused on an Auburn team that has beaten Arkansas in the previous six matchups.

“Our biggest concern is getting mentally prepared,” Pittman said. “We’re watching a lot of film on Auburn after we closed down the BYU game ... and getting back healthy. Those are our two biggest concerns, and we think we can do that by next Monday.”

“I’m pleased with the way the line has protected and because of that we have run the ball well,” Pittman said.

One area that Pittman said needs improvement is how the Razorbacks secure the football. The Razorbacks have fumbled the ball 14 times in 7 games with 6 of those fumbles being recovered by the opposing team.

“We have to do a better job with ball security,” Pittman said. “That’s not just the ones that are coming out, it’s also how we are carrying the ball as well. We’re going to make a big emphasis of that this next week.”

One running back who has not contributed as much as expected is Dominique Johnson (8 carries, 43 yards), who Pittman said is 100-percent healthy from the knee injury he suffered in the Jan. 1 Outback Bowl.

“It’s just a situation, where while he was out, other guys got better,” Pittman said. “We’re confident in Dominique [Johnson], but right now he’s in a depth-chart battle.”

“We’ve been pleased with how much AJ [Green] has improved through the season so far as well as R-dub [Rashod Dubinion],” Pittman said.

One area of focus during the bye week, Pittman said, was the on-going recruiting process.

“All of our coaches are looking to leave ... so they can get out and watch games and things of that nature,” Pittman said. “We certainly need to hold on to our 23s and obviously everyone is rolling on the 24s right now, so we’ll have the whole staff out, myself included. It’s important to hold onto the ones you have and to continue to recruit this class [2023] and 2024.”

The Razorbacks currently have the 17th-ranked class for 2023 according to 247Sports. Pittman also said his staff is also looking at the transfer portal as well as looking at junior-college prospects to help the team for the 2023 season.