HOGS in a rush to resume 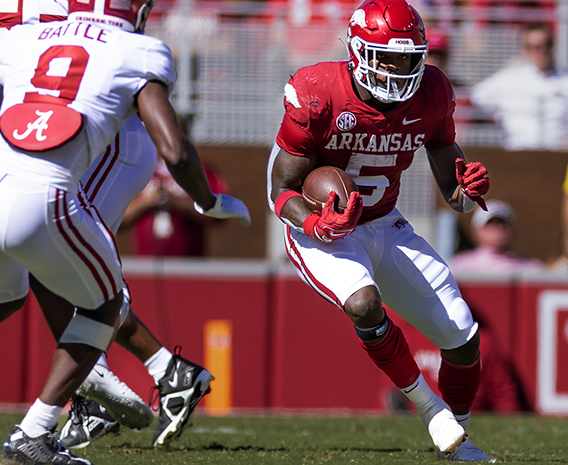 FAYETTEVILLE — The Arkansas Razorbacks (4-3, 1-3) are coming off a much-needed bye week, and head coach Sam Pittman said he feels his team is in good shape for its return to SEC play on Saturday against Auburn.

“I feel like we are as healthy as can be going into this game,” Pittman said. “We know that they [Auburn] have a lot of good players and are really talented. So, we’re looking forward to playing them.”

Pittman said Auburn’s recent downturn is no cause for complacency for an Arkansas program that has lost its past six matchups with Auburn.

“We haven’t beat them since I’ve been here,” said Pittman, who is 0-2 against Auburn. “For them to come back against Ole Miss … and make that a close, good football game on the road tells you a lot about the coaching staff and the kids believing in them by playing extremely hard.”

Kickoff at Jordan-Hare Stadium this Saturday in Auburn, Ala., will be at 11 a.m. and can be seen on the SEC Network.

“I think we opened up the game plan a little bit more last game,” Pittman said. “We can throw, and we can catch, especially when we’re unpredictable about what we’re doing on early downs. I think that helped us against BYU."

Pittman said he believes the offense will continue to improve as the season moves forward.

“As long as we continue to do well on third downs and hold onto the football, I think we’ll like how our offense looks," Pittman said. "I certainly do right now.”

The Razorbacks face an Auburn defense that yields 391 yards of total offense per game while also giving up 204.4 rushing yards per game, ranking last in the SEC and 119th of 131 FBS teams.

The Tigers have relied primarily on RB Tank Bigsby and Oregon transfer Robby Ashford (6-3, 212; Hoover, Ala.) at quarterback.

Ashford (1,104 passing, 4 TDs, 5 interceptions)  took over at QB after a 41-12 loss to Penn State in September and is the Tiger’s second-leading rusher (310 yards, 4 TDs). Ashford is coming off a 35-yard, 2-touchdown performance against Ole Miss last Saturday.

“He [Ashford] gets a lot of designed runs but can also get outside of the pocket and run the ball that way, which we are very concerned about,” Pittman said. “He’s got a strong arm, but he’s most dangerous when the receivers are covered downfield and he takes off.”

“I always liked Bigsby,” Pittman said. “I think he’s a really great player who breaks a lot of tackles. The emphasis this week for us is to try and get him down before he gets started. If he can get 3 to 4 yards on his own, he’s hard to bring down. We need to keep him as close to the line of scrimmage as possible.”