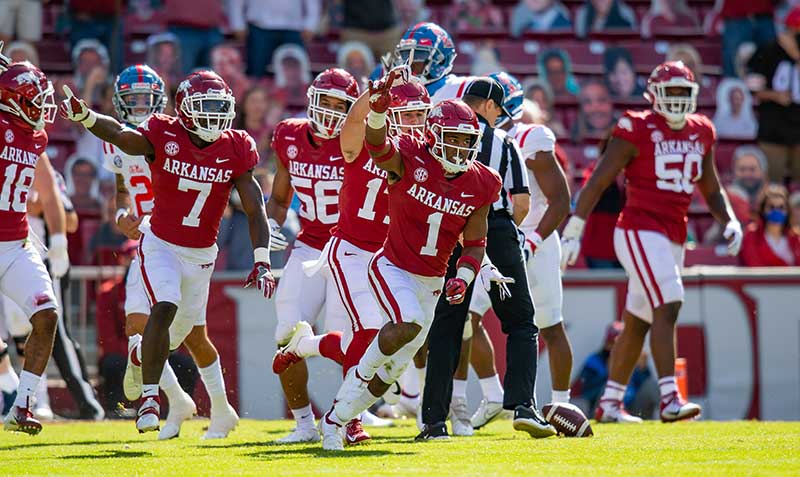 When asked if Jacobs, the transfer from Arkansas State, would figure in Saturday’s SEC West game plan against Texas A&M. Pittman said: “Jerry Jacobs has opted out. So he’s no longer on the football team.”

Because of ongoing covid-19 concerns, the NCAA allows players to “opt out” regardless of circumstances while remaining in school and on scholarship.

Jacobs has played all four games for the 2-2 Razorbacks and made 17 tackles. He started the first three and came off the bench Oct. 13 in the 33-21 victory over Ole Miss behind redshirt freshman Hudson Clark, nationally honored for his three interceptions against Ole Miss, and freshman Khari Johnson.

Junior Montaric Brown, considered Arkansas best cornerback when the season began, missed the past two games with injuries. With additional healing time from last week’s bye week, Brown should play in Saturday night’s 6:30 game at No. 8 Texas A&M. The SEC Network will televise the game.

KOILAN JACKSON OUT
Junior receiver Koilan Jackson posted on social media that he has undergone surgery, ending his 2020 season.

“It is a season-ending surgery, but he’s fine,” Pittman said. “He’s doing well. So we’re happy for that.”

Jackson lettered in 2019, playing 11 games and making three catches for 38 yards with one touchdown.

STARTERS AND SUBS
Pittman has a simple plan when an injured starter returns after his replacement has played well.

“You just let them both rep and then you have to make a decision,” Pittman said. “It’s a good problem to have. You certainly want to give opportunity to both individuals to start and go out there. The starting part, I think, means more to the kids than it does to the coaches. We just want to be able to play the two guys who have  been playing well. We know different guys have different values. The guy that’s earned the playing time for coming off the bench because of an injury or something like that, we’ll respect that, what he’s done in games, too.”

BOYD FULL GO
Senior running back Rakeem Boyd, missing one game and playing through injury against Ole Miss, is one of several players who has healed during the open date.

“I expect him to be full go, and he’ll be ready to play against A&M,” Pittman said.

Boyd and sophomore via Arizona Statre transfer Trelon Smith have carried the bulk of the running back load, but the position’s tendency for injury requires much practice for redshirt freshman A’Montae Spivey and true freshman Dominique Johnson.

The off week created time to work reserve quarterbacks K.J. Jefferson, a redshirt freshman, and true freshman Malik Hornsby. Each was employed unsuccessfully in a goal-line situation behind graduate transfer starter Feleipe Franks.

AGGIE WAR HYMN
Because of Monday’s 40-degree rain and an expected noisy Aggies crowd Saturday night, Pittman practiced the Razorbacks inside the Walker Pavilion on Monday with the Aggies’ fight song blaring.

“We’re going to go inside today and crank it up” Pittman said.