HOGS blast off in 2nd half to beat Tigers 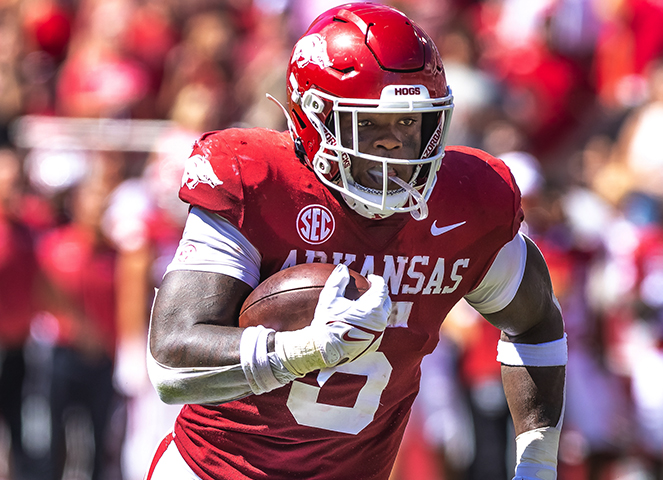 AUBURN, Ala. — The Arkansas Razorbacks ended all sorts of streaks Saturday at Auburn's Jordan-Hare Stadium in front of 83,792.

Arkansas' 41-27 victory over Auburn not only ended a 6-game losing streak to the Tigers, but the Razorbacks (5-3, 2-3) ended a 3-game SEC losing skid this season and a 3-game, 4-week stretch of games away from Reynolds Razorback Stadium.

Arkansas steps out of conference play and returns home against a 7-1 Liberty team that defeated BYU 41-14 last week, one week after Arkansas defeated BYU 52-35 in Provo, Utah.

Pittman is relieved to once again be playing in Fayetteville for the first time since its 49-26 loss to Alabama on Oct. 1.

“Hasn’t it been a long time?” Arkansas Coach Sam Pittman said, knowing the answer. “It was on paper before the season started and like everybody else you’re like ‘oh’. You might think about we’re on the road but you’re going, hey, we’ve got three at home. Now that doesn’t mean you’re going to win all of them, but you have a better chance at home than you do on the road.”

“It’s hard to win on the road, especially going up against quality teams like Auburn,” Pittman said. “The thing about Auburn is that they fought all the way to the finish. But I’m really proud of our kids with how they competed.”

Arkansas led by 4 points at halftime after leading 14-3 at one point.

Arkansas took control in the third quarter, scoring on both possessions — first on an 11-yard TD pass from KJ Jefferson to Haselwood (5-61 receiving, TD) and on a 2-yard run by true freshman Rashod Dubinion (5-11 rushing, 2 TDs).

Dubinion's TD was set up by Raheim "Rocket" Sanders' 76-yard dash down the sideline after Arkansas took over at its 6 following Oscar Chapman's punt.

Playing better in the third quarter has been a point of emphasis in recent weeks.

"We know we haven’t been the best third-quarter team this year,” safety Simeon Blair said. “We emphasized that a lot during practice leading up to this week, and in the locker room at halftime we had to come out, put our foot down, and reestablish that we were in control of the game.”

The Hogs continued adding on in the fourth quarter, taking a 38-13 lead with 7:35 to play on another 2-yard TD run by Dubinion.

Auburn scored twice in the final 5:28 — and Arkansas scored on a 37-yard field goal by Cam Little — to complete the scoring.

Auburn has lost four in a row since beating Missouri in overtime on Sept. 24.

“I would hope that no one is happy about losing a game,” Auburn Coach Brian Harsin said. “If it isn’t painful when you lose, then you’ve got the wrong people.”

Jefferson completed passes to Haselwood, Matt Landers (4-115 receiving), Warren Thompson (1-29), and Bryce Stephens (2-11), with 163 of his passing yards coming in a first half when the Hogs were held to 70 rushing yards.

Arkansas rushed for 216 yards in the second half to finish with 286, well above its average of 240.0-yards per game.

“I’m proud of him,” Jefferson on Sander’s milestone. “For him to reach 1,000 yards so fast in just his second year of playing running back shows the poise he has.”

Sanders praised the offensive line and receivers for their blocking, and Jefferson as well.

Arkansas' defense yielded 364 yards, but the Razorbacks held Auburn out of the end zone for more nearly 25 minutes in the second half as Arkansas opened its 38-13 lead.

“I think our good players played well in this game,” Pittman said. “Our defensive line did some things as far as moving [Robby] Ashford and overall, we got healthy to be perfectly honest.”