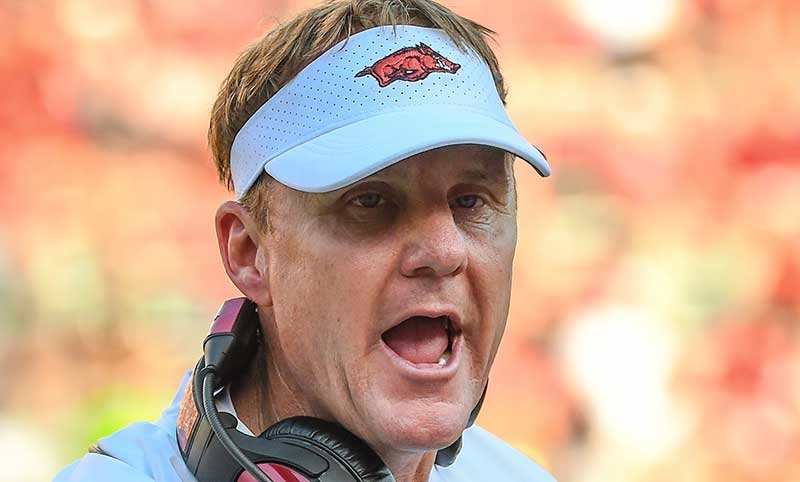 FAYETTEVILLE - Both on Wednesday morning’s SEC Coaches/Media teleconference and his Wednesday afternoon pre-practice press conference, Arkansas coach Chad Morris didn’t reveal the Razorbacks’ starting quarterback for Saturday’s game against the Mississippi  State, but he did say Ben Hicks is healthy and back in the mix.

Hicks missed Saturday’s 48-7 loss at Alabama after injuring his left shoulder during the 51-10 SEC West loss two weeks ago to Auburn.

Hicks practiced Tuesday and Wednesday along with graduate transfer Nick Starkel, the other starting QB for the  2-6 Razorbacks’ games. The Razorbacks, 0-5 in the SEC, prep for Saturday’s 3 p.m. SEC Network televised game at Reynolds Razorback Stadium against Coach Joe Moorhead’s Bulldogs (3-5, 1-4).

“They all got reps yesterday, but Ben was definitely looked as healthy as I’ve seen him in quite some time,” Morris said.

True freshman KJ Jefferson has not played but could play in all four of Arkansas’ remaining games and retain a redshirt for freshman eligibility in 2020.

“We’ve rotated those guys around with John Stephen getting some time with the ones, and KJ was in there getting some reps as he has for the last several weeks and doing a good job, a really good job,” Morris said just before Wednesday’s workout. “Just trying to make sure that we just keep him developing and on track for what we do.”

Moorhead was asked about Hicks, Starkel and Jones since all three have played.

“You get crossover film throughout the course of the season and certainly Starkel, Hicks and the young kid Jones came in and did a nice job at the end of the Alabama game and led a touchdown drive,” Moorhead said. “So it's difficult to prepare for all three. I don't know the system necessarily changes based on who is in the game, but you certainly have seen glimpses of production out of all three of those guys.”

Morris was asked about an internet outfit, HOTSEAT.COM, putting Moorhead No. 1 and Morris No. 2 on its coaches on the hot seat.

“Oh well, you can’t control what other people say, and that’s the least of my worries,” Morris replied. “My worries are making sure that this football team continues to get better every day.”

Senior Austin Capps, out since a concussion during the Auburn game, and third-year sophomore Kirby Adcock, starting against Alabama but concussed during the game, are doubtful against Mississippi State. Neither has practiced this week.

“We’ve definitely had some rotation this year due to injuries,” Morris said. ”Especially as of late. And Shane did a good job when he stepped in there last Saturday. He did a good job at filling some voids and did some good things. He’ll continue to come along and get better. We have to make sure we have a plan if we have any more injuries, so Shane will be working some at center (behind junior starter Ty Clary) as well.”

Clenin has worked at reserve tackle. A series of concussions, foot and back injuries compelled senior starting left tackle Colton Jackson of Conway this week to retire from football. So junior college transfer Myron Cunningham starts again at left tackle.

“It’s a next man up mentality,” Morris said. “So we try to do a good job of bringing some of these freshmen along - Beaux Limmer and Brady Latham and some of those guys. We know what Ricky’s done for us. When you have multiple injuries, it forces you to try to find your next best five and that means just sliding guys around. It’s not the ideal thing, but it’s the thing you do.”

Hayden is eligible under the 4-game maximum rule to redshirt and be a junior in 2020 while unplayed true freshman A’Montae Spivey could play in the final four games and still be a 2020 freshman.

“Where we’re at with our running back position, he’s (Hayden) already played his four games and our plans are trying to redshirt him if we can,” Morris said.

Morris was asked how sophomore starting cornerback Jarques McClellion responded to his coaches benching him in the second half against Alabama.

“I thought he had a good (Tuesday),” Morris said Wednesday. “He’ll respond to the challenge. It’s just something that you just come back to work and put your head down and try to get better and that’s what he did yesterday.”

“It was good both sides of the ball,” Morris said. “One of the better Tuesday practices that we’ve had. There’s still a lot left in this season and it starts this Saturday against Mississippi State.”

The Razorbacks play three of their last four games in Arkansas. After hosting Mississippi State on Saturday, they host  Western Kentucky at 11 a.m. on Nov. 9 on the SEC Network at Reynolds Razorback Stadium and close the campaign Nov. 29 by hosting Missouri in a 1:30 p.m. SEC game on CBS at War Memorial Stadium in Little Rock.