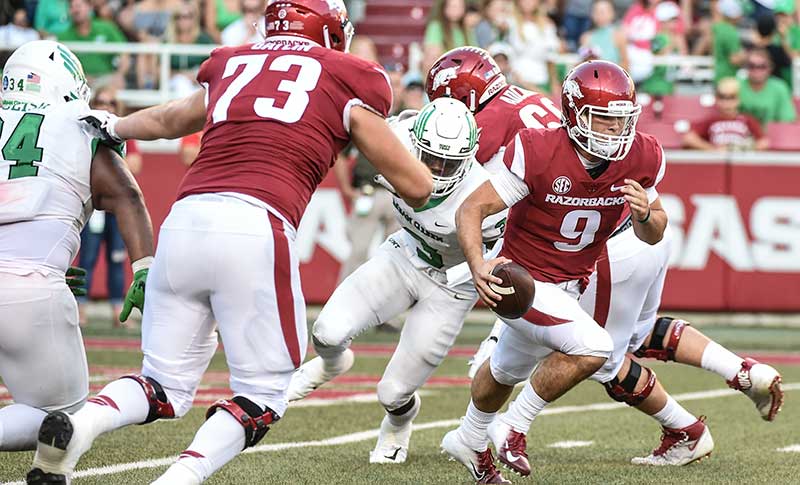 Arkansas (2-6, 0-5 in SEC) plays host to Mississippi State (3-5, 1-4) at 3 p.m. Saturday for homecoming at Reynolds Razorback Stadium. The SEC Network will televise the SEC West game.

The startling positive statistic: the Razorbacks played penalty-free Saturday in Tuscaloosa, although excessive effort can result in a penalty.

“I don’t ever recall going through a game without any penalties,” Arkansas head coach Chad Morris said. “That was a shocker.”

“Yeah, we are very surprised,” Arkansas offensive coordinator Joe Craddock said. “I’ve never been a part of that. We had a number of batted balls (knocked down by Alabama at or near the line of scrimmage). We tried to get Treylon the ball down the middle and the ball got batted down. We had a couple of others that I thought we could have done a better job. We had Mike Woods open on a seam ball for a touchdown and we missed him.”

Starkel completed five of 19 passes at Alabama with three interceptions, and he could not corral a high snap that became the first of Arkansas’ four turnovers.

However, if used against Mississippi State, Jones must be game-planned and counted upon to involve Knox, Burks, Woods and Morris.

“We’ve got to be able to utilize our playmakers out in space,” Morris said. “Part of our game planning, making sure we get those guys opportunities to make plays.”

KJ PACKAGE
While not likely among the QBs Morris figures to decide upon as the starter, true freshman and unplayed QB, KJ Jefferson, has a package designed that he could play off the bench.

“He’s got some things he’s focused on that we can do with him, and he feels comfortable with,” Morris said.

OTHER ROOKIES
Aside from Jefferson, true freshmen under the four-game redshirt maximum who could play Saturday include touted tight end Hudson Henry of Little Rock, and offensive linemen Beaux Limmer and Brady Latham.

With injuries to senior left tackle Colton Jackson (retired this week with a painful back re-injury compounding a season of two concussions and a lingering foot injury) and left guards Austin Capps and Kirby Adcock (concussions), Limmer and Latham become second-team.

As does sophomore Shane Clenin practicing at center behind Ty Clary even as Clenin debut starts as Arkansas’ third opening left guard in as many weeks. Limmer has practiced at center, while true freshman Ricky Stromberg starts at right guard.

“We’ve got to bring our freshmen along,” Morris said. “Beaux Limmer and Brady Latham and some of those guys. When you have multiple (offensive line) injuries, it forces you to try to find your next best five, and that means just sliding guys around. It’s not the ideal thing, but it’s the thing you do.”