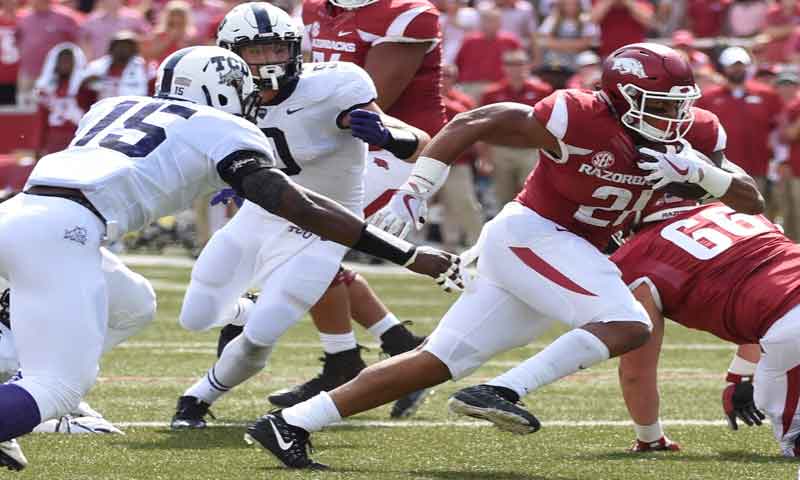 FAYETTEVILLE - Chad Morris wished he had a quick answer to the fast question.

Since, the LSU Tigers held Morris’ Razorbacks to 16 yards net rushing last week even as Arkansas battled back from a 21-point deficit in a 24-17 loss,  how can Arkansas run the ball Saturday against Mississippi State's nationally No. 20 rushing defense and No. 5 scoring defense?

“A lot of teams have been trying to figure that out this year,” Morris  “I think they have only given up 12 touchdowns all year long, nine coming into last week. They are extremely fast, physical and they are athletic at all positions. As I shared earlier, this is the fastest overall, top to bottom, team defensively we've seen.”

“Again, it goes back to us,” Morris said. “We've got to do a good job of sustaining blocks. When we do get our opportunities, we've got to make sure we're picking up the three-, four-yard gains at times. And mix up the run and the pass.”

BACK TO BASICS
The blocking and running wasn’t there for Rakeem Boyd against LSU, carrying 10 times for 30 yards until injured.

“We have to get back to what we do,” Craddock said of establishing the run.  “I thought LSU was good up front. We were able to cover them up at times and hit some decent runs. Then other times, they were able to win at the point of attack and were able to stop us. Again, we have to focus on what we do and make sure we know exactly what we’re doing every play.”

MSU OFFENSE
After Alabama shut down MSU 24-0, Moorhead, a former Penn State offensive coordinator, said State has some offensive retooling to do before the Hogs hit Starkville.

“There’s a reason they (Alabama) are the No. 1 team in the country and defending national champion,” Moorhead said. "I thought we fought hard in all three phases. I thought our defense gave us a chance and I thought the offense really didn’t do enough to allow us to pull off an upset of that caliber.”