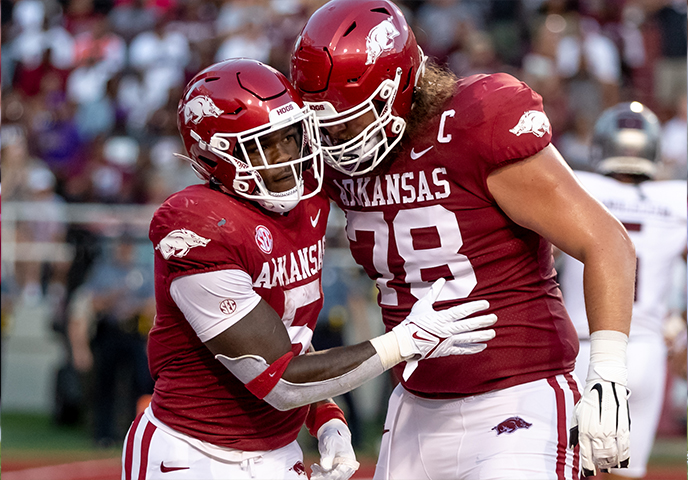 FAYETTEVILLE — The absence of starting quarterback KJ Jefferson was apparent in Saturday's 13-10 loss to LSU, with the Razorbacks' offense held to season lows in rushing, passing and points.

Will Jefferson be available for Saturday night's 6:30 p.m. matchup with No. 14 Ole Miss at Reynolds Razorback Stadium?

Arkansas Coach Sam Pittman sounded hopeful, but he provided no guarantees at Monday's meeting with media.

“We’ll have to see how he [Jefferson] is at practice to be perfectly honest with you,” Pittman said. “But I know that he feels better than he has compared to the last two weeks.”

Pittman said he would turn to either Malik Hornsby or Cade Fortin to be the starting quarterback if Jefferson (bruised clavicle) is unable to play.

Fortin (6-3, 218; Suwanee, Ga.) replaced Hornsby midway through the third quarter and completed 8 of 13 passes for 92 yards and provided the Razorbacks' only touchdown of the game with a 40-yard reception to Matt Landers.

But Fortin and the Razorbacks could no build on that success, picking up 2 first downs over their final 3 possessions while trailing by 3 points.

Last Saturday's game was different from the other game Jefferson missed with injury, against Mississippi State.

It was Hornsby who took over after Fortin got the start.

Pittman said Hornsby and Fortin are competing to see who the starter  would be if Jefferson is unable to play against Ole Miss.

“The problem that we have is the unknowing of KJ [Jefferson] in game planning,” Pittman said. “It’s a little easier if Malik [Hornsby] is the guy because there is some similar talent with being a dual threat but Cade [Fortin] made some nice runs the other day.”

Jefferson was one of two offensive starters to sit out against LSU, the other being offensive tackle Dalton Wagner (undisclosed injury).

“My philosophy on it is that we don’t ever say that a kid is out if he can do something in practice," Pittman said. "That’s what we're going to do with Dalton and just to see how far he can go.”

Ole Miss leads the SEC and ranks No. 3 in all of the FBS with 259.8 rushing yards per game.

“He’s a big-time threat coming out of the backfield and has really good speed," Pittman said. "He’s the guy that makes them go on offense."

“He’s a better runner than I want him to be,” Pittman said. “I’m really concerned about his running ability because he’s really good at it.”

Dart is a dangerous passer, as well.

“He’s accurate and not afraid to make a back-shoulder throw,” Pittman said. "He seems to me like he is very comfortable in the offense.”

The Razorbacks are allowing 146.6 rushing yards per game, but are coming off a game against LSU in which they gave up 198 rushing yards.

The Rebels were eliminated from the SEC West race with their loss to Alabama and LSU's win over Arkansas.

“With Ole Miss, they are obviously very explosive on offense,” Pittman said. “Defensively, they are disruptive and can get after the quarterback. They lost a close game Saturday, but they play extremely hard and are well coached.”