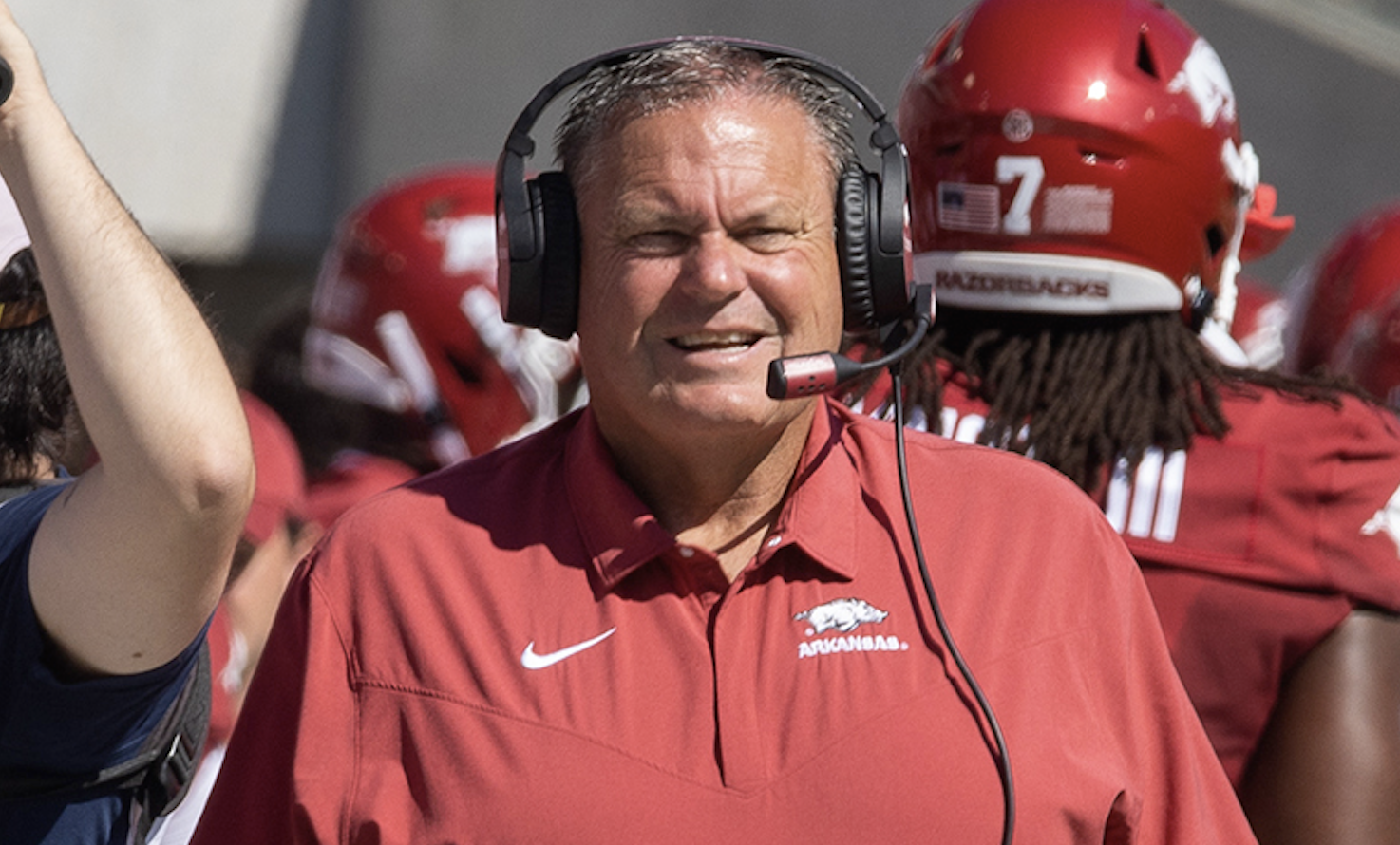 Fayetteville- The Arkansas-Ole Miss rivalry has provided a plethoraof memorable moments for Razorbacks fans, some positive and others that can't be forgotten. Recently, Arkansas has its share of winning memories (a 58-57 7-ovetime win in 2001, the Henry Heave in 2015 and the following season a clutch forced fumble by former Razorback safety Santos Ramirez).had its share of heartbreaks (Ron Dickeson stopped inside the 1-yard line on the final play of a 21-17 loss in 1990 and last season's failed 2-point conversion in a 52-51 setback). Regarding last year's contest, Razorback head coach Sam Pittman has stated that if he were in that same position again, he would still go for two. The same could not besaid for Ole Miss head coach Lane Kiffin, who spoke about the play duringhis weekly SEC teleconference appearance.“I probably wouldn’t have gone for it because we were at home,”said Kiffin. “That doesn’t mean I am right. You do go for two in a highscoring game like that, so you have the last shot.”Though last season’s game was one to remember, both teams mustfocus on this year's meeting on Saturday at Razorback Stadium. Both teams are looking to avenge losses last week, with the 14th ranked Rebels (8-2, 4-2) losing to Alabama and the Razorbacks(5-5, 2-4) losing to LSU. Kiffin knows that despite the Razorbacks cominginto Saturday’s matchup with back-to-back losses, his Rebels will have atough task at hand defeating a Hog team fighting for bowl eligibility.“Arkansas is a very talented team that outplayed LSU in manyways Saturday,” said Kiffin. “They had a bunch of chances with backupquarterbacks to beat them. That tells you about how well they play at timesand how well they played Saturday.”Kickoff for the game will be at 6:30 p.m. on the SEC Network.Thompson Leaves TeamThe Hogs need 1 more victory to reach bowl eligibility, and with two tough games remaining, they need all available players. Unfortunately for the Hogs, wide receiver Warren Thompson, left the Razorback football program, Pittman said Wednesday.“He [Thompson] quit the team,” said Pittman bluntly.Thompson (6-3, 198; Seffner, FL) joined the Razorback footballteam in 2021 after transferring from Florida State. In his first season asa Razorback, Thompson caught 19 passes for 304 yards and two touchdowns.This season looked to be a step-up year for the receiver, but the arrivalof transfers Matt Landers (37 rec, 663 yds, 4 TDs) and Jadon Haselwood (48rec, 592 yds, 3 TDs) led to a decrease in production. Thompson leaves theteam with 12 catches for 178 yards and two touchdowns so far this season.With Thompson's departure, Pittman said stated redshirt freshman Jaedon Wilson (6-3, 175; DeSoto, TX) would likely crack the receiver rotation.“Obviously Warren [Thompson] hadn’t started a lot of games withMatt [Landers] and all those things,” Pittman continued. “But Jaedon Wilsonwould be the next guy in that rotation.”Wilson has appeared in six games so far this season for theRazorbacks, bringing in one reception for two yards which occurred in the52-35 victory over BYU.*Updates for Key Players*Despite Thompson's leaving the program, there is positive news on the injury front, update on both quarterback. Senior quarterback KJ Jefferson and right tackle Dalton Wagner who both missed last Saturday’s game against LSU, could play this week.“He’s [Jefferson] practiced most every play this week so I feelgood about him,” said Pittman. “Dalton Wagner also has practiced a lot thisweek.”Though both players have been practicing, Pittman neverdiscussed if either player would be available for the game against Ole Missbut has been impressed with their progress throughout practice.“Certainly, there’s some soreness in both those guys[Jefferson, Wagner] but that’s going to happen in game number 11 in ourleague,” said Pittman. “But I do feel pretty good about both those guys.”Jefferson’s absence at quarterback Saturday was apparent,as backup quarterbacks Malik Hornsby and Cade Fortin struggled to getanything going through the air, combining for a season-low 116 passingyards. Jefferson will also look to redeem himself following his lastappearance, 20-19 loss to Liberty, when he threw for 2 TDS, but was unable to convert a two-point conversion that would have tied the game in the final minutes. He also threw a season-high 2 interceptions.Wagner hopes to return to an offensive line that struggled to open up running lanes againt LSU (ran for 133 yards). The offensive line also struggled to protectthe quarterback throughout the game, giving up five sacks.Along with the update on his injured players, Pittman also announced that safety Myles Slusher has served a suspension stemming from his Nov. 6th arrest for disorderly conduct, and will be available to play in the game against the Rebels. Slusher, in just 5 games due to injuries and the suspension, has 20 tackles, 2 sacks and 1 pass deflection this fall.