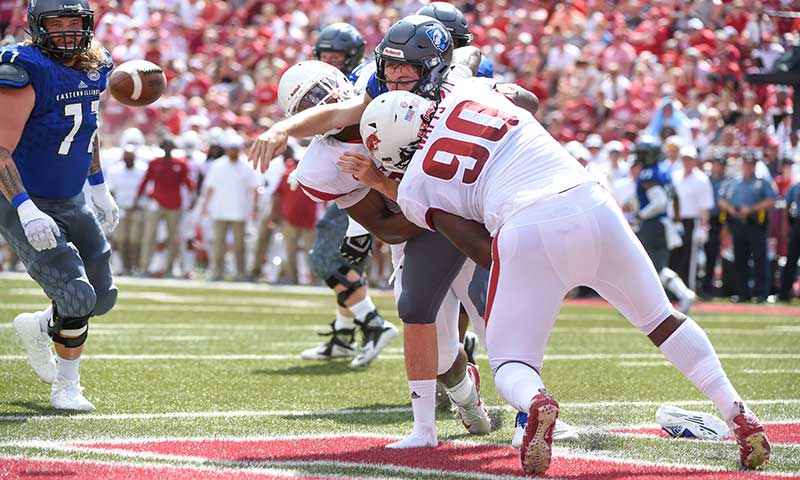 FAYETTEVILLE - Arkansas coach Chad Morris was greeted Wednesday with inquiries of how his revised secondary adjusts to Friday’s finale at Missouri.

Missouri has won its past three games over SEC rivals Florida, Vanderbilt and Tennessee and will go bowling after closing its  SEC campaign against Arkansas.

True freshman Joe Foucha at safety and redshirt freshman Montaric Brown of Ashdown at corner work first-team in their place.

“I think our guys have done a really good job,” Morris said.  “The energy level has been high, and it’s kind of been all hands on deck. Everybody understands we’ve got to continue to pull together, and this is just a golden opportunity for some of these young guys and they’ve done a good job this week.”

PURPLE DOG REUNION
Should they feel up, a contingent playing Friday could reconvene in Fayetteville for a Fayetteville High School alumni game.

“He was my quarterback for three years,” Clary said. “We had a lot of fun memories together and school work together, on the field together. We won two state championships. That team, I feel like, was pretty close.”

Clary also was asked about Byers.

Bragging rights will be on Friday’s line, but friendships will continue.

“Last year, we lost to them,” Clary said. “This year, we are looking to beat them. I am really excited to see my old teammates from high school. That high school team was really something special to all of us.”

O’Grady shares fond FHS memories with some he plays against Friday.

“It’s bringing back the glory days,” O’Grady said. “It’s been about four or five years now since I’ve been at Fayetteville (HS) playing with all of them. It’s kind of like a big family reunion. Everybody gets to go compete at the next level. So it’ll be big fun.”

“He’s really developed since he’s been in high school,” O’Grady said. “He was kind of like a quiet player, wasn’t really doing anything spectacular. Then the next thing you know he blew up when I got into college. Alabama offered him. He ended up going to Mizzou, and he’s been doing well.”

“It means a lot,” Wallace said. “Considering it's come full circle for me since Mizzou was my first offer. Now it's the last time I will step foot on the field in full pads.”

Ditto for Watts. “It’s big,” Watts said. “I’ve been there my whole life. My family’s gonna be there, friends, so it’s definitely big for me, especially playing on that field. I’m just ready to give Mizzou all I’ve got.”