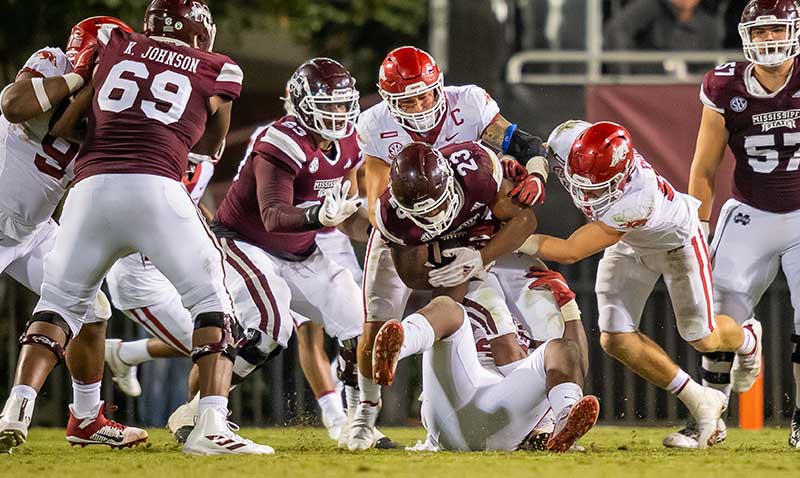 FAYETTEVILLE - Given graduate transfer Feleipe Franks’ quarterbacking impact on the 2020 Razorbacks, it seemed unthinkable this Arkansas team could thrive without him.

But redshirt freshman KJ Jefferson performed so well Saturday starting for an injured Franks in the 50-48 loss at Missouri that these Razorbacks believe they can battle No. 1 Alabama with Franks or Jefferson.

“Yeah, I think KJ stepping up for us in the Missouri game shows the level of maturity he has and that whenever his number is called you have to be ready,” Cunningham said after Tuesday’s practice. “He was prepared the whole week like a starter, like a leader, and that’s what he came out and did. He led the team and we were successful.”

The Razorbacks achieved a season-high 566 yards total offense with 292 rushing, including 32 and a TD from Jefferson. He completed 18 of 33 passes for 274 yards and three TDs.

EXPERIENCED VS. NO. 1
Although it would be only Jefferson’s third career start Saturday, it would be his second start against a nationally No. 1 SEC West champion.

While under the four-game limit allowed to redshirt last year, Jefferson started and eventually exited injured during the 56-20 loss to eventual 2019 national champion/SEC champion LSU.

“I think starting in an SEC game always helps you with experience because experience is the best tool,” Cunningham said. “I think he'll be fine versus Alabama if he has to step in. He prepares like a winner. That’s what he is.”

Burks and Franks have meshed like biscuits and gravy in eight games with  39 completions for 598 yards in fact.

ROOMIES RECALL
But in Columbia, Mo., Jefferson and Burks surpassed as a dynamic duo. Burks logged a career-high 206 receiving yards by catching 10 passes from Jefferson.

“We were roommates last year, and we always talked about this,” Burks said after Tuesday’s practice. “That connection with each other. Just the way that we prepare. There were times in practice where he threw the same ball and just connected perfect. It really wasn’t a surprise.”

Burks said Jefferson practices “like he’s fixing to start,” and with  nearly two full seasons behind knows the playbook.

“He’s gotten in the playbook a lot more this year,” Burks said. “You can tell he wants it. Obviously, he wanted it last year, but it’s just a maturity each year where everybody gets better. That’s one place where I’ve seen him get better.”

NEXT MAN UP
Defensively, it seems the Razorbacks must prepare without Butkus Award nominee and senior linebacker Grant Morgan.

Pittman said the Razorbacks missed Morgan’s coach-on-the-field ability as much as his tackling.

“It’s just a next-man-up mentality,” freshman safety Jalen Catalon said. “I know we have a lot who are rotating through Hayden Henry, Andrew Parker, Jackson Woodard. It’s different people rotating in, but it’s just next-man-up mentality. So, whoever's in starting next at the linebacker position has to come in and be vocal. I know the coaches are looking to me to kind of be the guy to make sure everything is lined up well, too. I don’t mind taking on that role and making sure things are running smoothly. But when it comes to a linebacker standpoint, it just has to be next man up, and I believe in the guys behind him to do their jobs.”