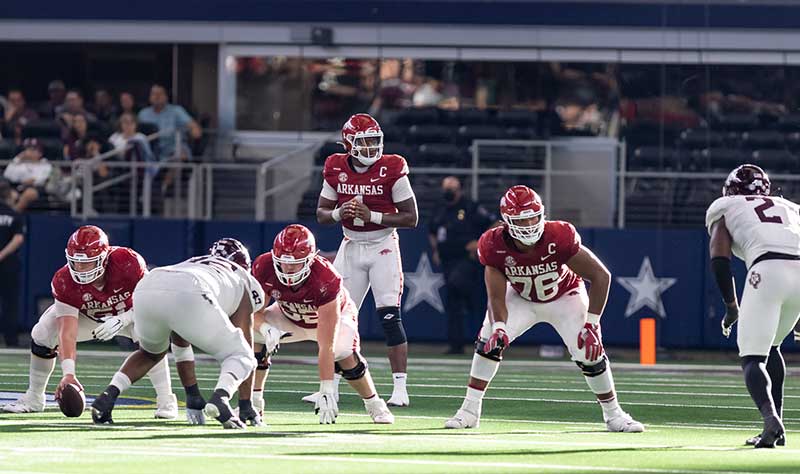 FAYETTEVILLE - Ten Arkansans are expected to sign football letters Wednesday with the Arkansas Razorbacks to kick off the December early signing period.

Verbal commitments are non-binding until the letter of intent is signed.

Defensive back Myles Rowser of Belleville, Mich., may sign with the Razorbacks in February.

Two considering other schools including Arkansas who could sign Wednesday are receiver Sam Mbake of North Cobb, Ga. and DB Latterance Welch of Lafayette, La.

Through the transfer portal, the Razorbacks add WR Jadon Haselwood of Cedar Grove, Ga., via the University of Oklahoma, and DE Landon Jackson of Pleasant Grove, Texas, via LSU.

Verbally committed defensive back Myles Rowser of Belleville, Mich., is not expected to sign until the February signing period.

LOSING BURKS
In his first meeting with media since Arkansas first-team All-SEC receiver Treylon Burks opted out of the Razorbacks Jan. 1 Outback Bowl game against Penn State to turn pro, Pittman addressed Burks’ impact on these 8-4 Razorbacks’ progress and now how to fill his roles against Penn State.

Burks, 66 catches for 1,104 yards and 11 touchdowns plus 14 rushes for 112 yards, is preserving his health for the spring’s NFL draft.  He’s rated a late first-round/early second-round draft choice with stock bound to rise during the NFL Combine interviews, Pittman said.

“He’ll raise it because they’re going to meet him,” Pittman said. “He’s a phenomenal kid.”

It would have been truly Arkansas phenomenal to have Burks for this bowl game and a 2022 senior season, but Pittman knows to treasure what the junior from Warren has produced.

“It’s hard for me to be disappointed in a man who leaves after three years and doesn’t play in a bowl and those things after all the things he’s done for the University and for the football team and for me personally.” Pittman said. “He’s just a phenomenal guy.”

BRIGHT FUTURE
Pittman said Burks (6-3, 225) has all the tools to be a great professional.

“Great character,” Pittman said. “And when he's one on one, just throw it to him and he'll be able to come down with it if it's anywhere close to him.  He's got a bright, bright future in the game and a bright future outside of the game. I think the whole state of Arkansas is proud of what he did. I certainly am. We're very thankful he was here for three years."

Pittman said he and Burks discussed various options, including possibilities of insurance policies, first when Burks pondered whether to return for next season, and then whether to play in the bowl.

Not that it was needed, Pittman said, but the coach said he “supports” Burks’ decision.

LIFE AFTER BURKS
Regarding replacing Burks against Penn State, one man can’t. So the offense must respond in different ways.

“He’s so valuable to us,” Pittman said. “I mean, so valuable. Everybody in the building knew we were going to go to him, including the guy guarding him. So, yeah I think some of that is maybe gonna change what we do.”

And from what Penn State’s defense would do if Burks were in the game vs. now that he isn’t.

“I anticipate a heavy box from Penn State,” Pittman said, knowing minus Burks the Hogs will rely on the run even more. “I anticipate a full seven-man box, probably a man-to-man (coverage) free type situation, even though they’re a zone blitz team. I would think they’d try to outnumber us in the box and try to stuff our run game.”

WATCH KJ RUN
Look for 6-3, 245-pound sophomore quarterback KJ Jefferson to shoulder more of the running back load in the Outback Bowl since he’s had weeks to refresh from a grueling season and won't play again until the Sept. 3, 2022 opener against Cincinnati. Running backs Dominique Johnson and Raheim “Rocket” Sanders will be more healed from late season leg and shoulder injuries.

“I think he (Jefferson) is going to run if we need him to win the game,” Pittman said. “We went into Ole Miss thinking that would be the way for us to win the game, and I’m not sure that it didn’t affect him a little bit against Auburn, being beat-up and those things. We’re going out there to do the best we can and use our personnel the best we can to win.”

TIME FOR DE’VION
Senior De’Vion Warren comes off his best game of 2021 with a 55-yarder among one of his three catches and a 32-yard run on one carry in the 34-17 regular season-finale victory over Missouri. Warren has switched from wide receiver to Burks’ slot, while true freshmen Ketron Jackson and Bryce Stephens, and transfers Warren Thompson via Florida State, Jaquayln Crawford via Oklahoma, have increased opportunities.

Pittman looks at Helena native senior Tyson Morris, now the stats leader with 21 catches for 305 yards and two TDs, to lead in the clubhouse and into his last Razorbacks game.

“Tyson Morris is going to have to pick up a little for Burks not being there,” Pittman said.

Because he also wants to kick field goals, which looks to be Little’s job through 2024, Calvaruso entered the transfer portal as Mr. Automatic for booting kickoffs out of the end zone.

“There was probably about a two- to three-yard (kickoff) difference on average on Vito and Cam, so we feel very confident we can kick it out,” Pittman said. “But I hated to lose Vito ... very valuable to us on those kickoffs.”