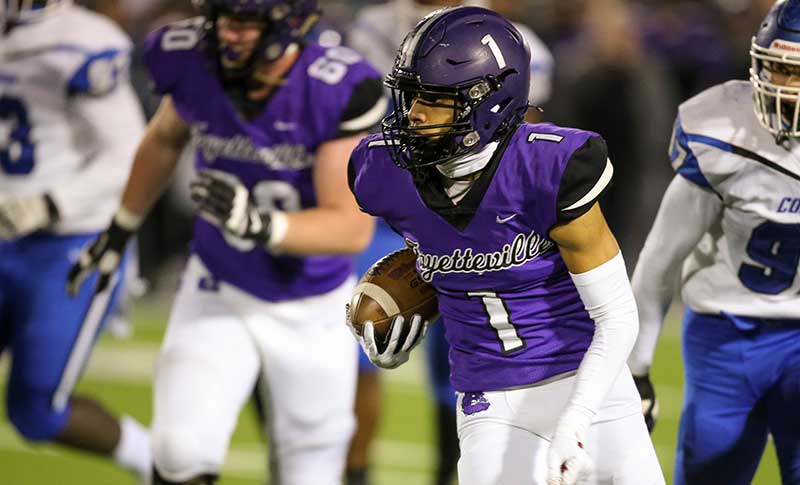 FAYETTEVILLE - During his 2013-2015 years as Arkansas' offensive line coach and his stint as head coach starting in 2019, Sam Pittman said he’s never seen more potential Arkansas-born Razorbacks than out of this 2022 freshman class.

Pittman inked 10 Arkansans Wednesday among 22 athletes who signed in the early signing period.

“We have signed 10 from the state of Arkansas,” Pittman said Wednesday. “And that was as good as when I was here before for three years of the recruiting cycle. I thought it was the best class of athletes from the state of Arkansas. We went up to Tennessee for a few, Texas for a couple. Georgia has been a strong for us, signing four out of the state of Georgia. We pieced together a few from Australia, South Carolina and Wisconsin.”

Jadon Haselwood (6-3, 200) transfers from the University Oklahoma as a senior three-year letterman receiver who caught 39 passes for 399 yards for OU this season. He was a five-star prospect out of Ellenwood, Ga., when he signed in 2019 by former OU coach Lincoln Riley.

Defensive end Landon Jackson (6-7, 273) transfers as a sophomore defensive lineman from LSU after playing five games as a reserve in 2021. Like Haselwood from OU, Jackson transfers following a head coaching change.

“I am excited about transfer signees we had today in Haselwood and certainly Landon Jackson,” Pittman said.

With first-team All-SEC receiver Treylon Burks declared for the 2022 draft, and bonus senior receivers Tyson Morris and De’Vion Warren completing their eligibility at the bowl game, receivers were an Arkansas recruiting premium.

“Haselwood has played a whole lot of ball,” Pittman said. “Landon has played some ball until he got hurt. We need help at both those positions in my opinion. I think those two guys are probably about as good as there are in the country in the portal at defensive end and at wide receiver. I'm very excited to get both of them because we're expecting them to help us immediately."

Haselwood, McAdoo, and Mbake possess the size Pittman and receivers coach Kenny Guiton crave. Though only 5-11, Sategna is just too fast and strong to let get away.

“We wanted to stay as big as we possibly could in length so we could win one-on-one contested balls,” Pittman said. “But Sategna was just so fast and, to be honest with you, very physical for his size and can win a one-on-one battles. In high school, he was winning them all the time.”

Pittman said those are four he would have offered scholarships to when he was coaching the Georgia offensive line that helped the Bulldogs win an SEC championship.

“Chamblee, whom I think has potential to be a great player," Pittman said. "has everything. Size, feet, all those things.”

Pittman is trying to persuade leading tackler and linebacker Bumper Pool, a 2021 senior who can return due to the covid disrupted 2020 season, to come back.

“I like Pooh Paul,” Pittman said. “I like Parker, and it's no secret I'm trying like crazy to keep Bumper Pool. I love the young three linebackers we signed. We'll see if we need to go into the portal for another guy.”

The portal game continues to swing both ways.

Pittman said that the defensive backs own the speed and hands to play receiver.

The most primary recruit in the secondary seems to be third-year sophomore safety Jalen Catalon, a Football Writers Association 2020 Freshman All-American. Catalon announced  Tuesday his 2022 return to the Razorbacks. Draft eligible as a third-year player, Catalon contemplated turning pro after his outstanding 2021 season was cut to six games by a season-ending shoulder injury requiring surgery.

“Well, I think he made a great decision,” Pittman said of Catalon returning for the Razorbacks. “For him personally, I think it was a good decision, as well. Certainly coming off the shoulder that he had last year, he wasn’t able to complete what was a fine season. With him coming back, it’s a big, big thing for us. I think it will certainly help him and Ricky (Stromberg, the junior center who is returning) the same way.”

With 2021 star quarterback KJ Jefferson to return as a junior and reserves Malik Hornsby, Lucas Coley and walk-on via Ole Miss transfer Kade Renfro returning, the Razorbacks did not sign a QB.

“We made a decision not to sign a quarterback this year simply because we felt like we were on some really good ones in the 2023 class, and we felt like it would help us get them,” Pittman said.

Nationally, the Razorbacks recruiting class was rated 12th by Rivals and 17th by 247sports.